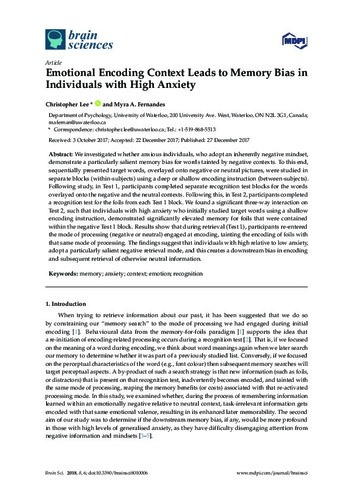 We investigated whether anxious individuals, who adopt an inherently negative mindset, demonstrate a particularly salient memory bias for words tainted by negative contexts. To this end, sequentially presented target words, overlayed onto negative or neutral pictures, were studied in separate blocks (within-subjects) using a deep or shallow encoding instruction (between-subjects). Following study, in Test 1, participants completed separate recognition test blocks for the words overlayed onto the negative and the neutral contexts. Following this, in Test 2, participants completed a recognition test for the foils from each Test 1 block. We found a significant three-way interaction on Test 2, such that individuals with high anxiety who initially studied target words using a shallow encoding instruction, demonstrated significantly elevated memory for foils that were contained within the negative Test 1 block. Results show that during retrieval (Test 1), participants re-entered the mode of processing (negative or neutral) engaged at encoding, tainting the encoding of foils with that same mode of processing. The findings suggest that individuals with high relative to low anxiety, adopt a particularly salient negative retrieval mode, and this creates a downstream bias in encoding and subsequent retrieval of otherwise neutral information.