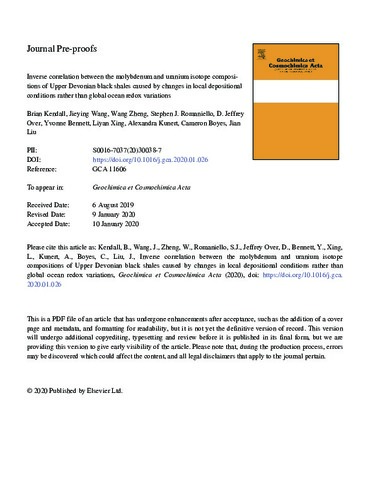 Coupled Mo-U isotope data from the Upper Devonian Kettle Point Formation (Ontario, Canada) provide a cautionary tale regarding interpretation of global ocean redox conditions using data from euxinic black shales. In the Gore of Chatham core, the Kettle Point black shales have high Mo concentrations (48–473 μg/g) and consistently high Mo/U ratios (≥3 times the Mo/U ratio of modern seawater), suggesting a euxinic depositional environment. These shales yield an inverse correlation (r = 0.89, p < 0.001) between authigenic U isotope (δ238U = –0.3‰ to +0.6‰ relative to CRM145 = 0‰) and Mo isotope (δ98Mo = +0.5‰ to +2.0‰ relative to NIST SRM 3134 = 0.25‰) compositions and a stratigraphic trend upsection towards lower δ98Mo and higher δ238U. These stratigraphic trends were probably not caused by global ocean redox variation, which should shift both isotope systems in the same direction. Instead, the inverse correlation between the δ98Mo and δ238U of the black shales indicates that changes to local depositional conditions in the Chatham Sag affected both isotope systems, consistent with the lithological and elemental evidence for variable paleohydrographic conditions (paleosalinity and sea-level). Black shales with the highest δ98Mo and lowest δ238U likely capture the most quantitative removal of Mo and U from more intensely sulfidic bottom waters, and thus most closely approximate global seawater isotope compositions. Lower δ98Mo and higher δ238U in the black shales likely record less quantitative Mo and U removal from weakly euxinic bottom waters and thus capture greater sediment-seawater isotope fractionation (lighter Mo isotopes and heavier 238U were preferentially removed from seawater to the sediments). Some samples with low δ98Mo (0.5-1.0‰) have high V and Mo enrichments, suggesting delivery of V and isotopically light Mo to the sediments by Fe-Mn particulates, but this process does not significantly affect U isotopes (because of weak adsorption of U onto Fe-Mn particulates) and is thus not the major driver of the inverse correlation. The highest δ98Mo (2.0‰) and lowest δ238U (–0.3‰) from the lower Kettle Point Formation may thus represent minimum and maximum estimates of the Mo and U isotope compositions, respectively, of early Famennian global seawater. The slope of the inverse Mo-U isotope correlation for the Kettle Point black shales broadly parallels data from modern euxinic basins but is shifted to slightly lower isotopic compositions. Hence, Famennian seawater likely had δ98Mo (about 2.0‰ to 2.2‰) and δ238U (about –0.7‰ to –0.4‰) values that were slightly lower than modern global seawater (δ98Mo = 2.3‰; δ238U = –0.4‰), suggesting a mildly greater extent of euxinia (up to 5% of the seafloor) in the Famennian oceans. The opposite stratigraphic trends in δ98Mo and δ238U through the Kettle Point Formation may have caused misinterpretation of global ocean redox conditions if either isotope system was used individually. Hence, paired Mo and U isotope analyses are recommended to determine if stratigraphic trends through euxinic black shales are caused by local depositional changes or global ocean redox variations.