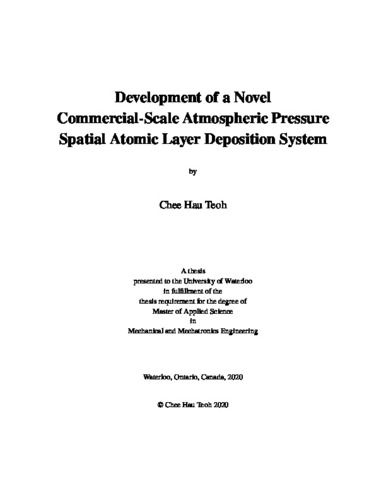 Atmospheric pressure spatial atomic layer deposition (AP-SALD) is an advanced thin-film fabrication technique. It can produce high quality (uniform, conformal, pin-hole free), large-area ultrathin films at speeds up to hundreds of times faster than conventional ALD. In this work, a pilot-scale industrial AP-SALD system was successfully designed and built from the ground up. Azinc oxide thin filmwas successfully deposited on a large borosilicate glass substrate with the system at high speed. The industrial AP-SALD system has a reactor head that is modular and configurable for functional flexibility and scalability to produce thin films by leveraging on the atomic layer deposition method. The reactor head is made up of different types of components such as precursor gas slits, exhaust slits, plasma sources, and heating and/or cooling channels for configurable depositions. CFD simulations in 2-dimensional (2D) and 3-dimensional (3D) models were conducted to guide the reactor design based on the isolation of precursor gases and the uniformity of precursor flow. The interspaced elevation and widths of each component can be adjusted to provide tunable control of the flow of gases. A positioning system with a mounting component for the reactor head is designed to provide flexibility in configuring and maintaining the orientation as well as the position of the reactor head relative to the substrate(s). The positioning system uses three laser sensors and four linear actuators to achieve desired reactor head-substrate spacing based on plane equations and rotation matrices. A heating stage with suction is used to heat up and to hold substrates of different sizes, geometry, and thickness. A heater controller box was built to control the heating through the connection with the PLC. A built-in temperature process program from Siemens PLC is used to configure the parameters of the PID controller for the heater. A linear stage is used to oscillate the substrates relative to the modular reactor head. A 3rd order motion profile is implemented to limit the jerk in the system.