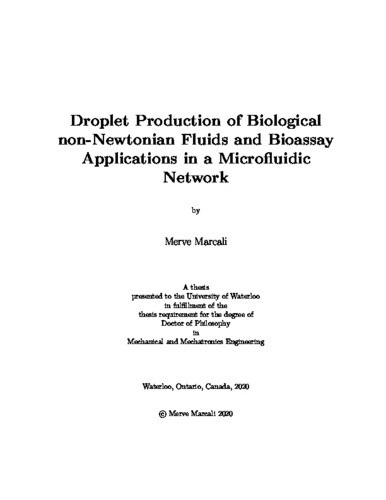 Droplet-based microfluidics has been developed over the last two decades and presented as a promising platform for biochemical assay. This promise relies on the system’s ability to quantify the reagents accurately with high throughput. In addition, since each droplet act as a micro-reactor, faster reaction time and reduced reagent consumption can be achieved. Most of these biochemical assays require biological samples to be handled, which is nonNewtonian in nature. However, there is little information on droplet formation dynamics of biological non-Newtonian fluids. Therefore, this thesis investigates the formation dynamics of the droplet of red blood cells as a non-Newtonian fluid. Then, a bio-assay to quantify the viruses in red blood cell solution is developed by using droplet based microfluidic system to show the system’s sensitivity and precision. The first part of the thesis focuses on the droplet formation of biological non-Newtonian fluids in a T-junction generator under the squeezing regime. In this regime, droplet formation with Newtonian fluids depends on T-junction geometry; however, the formation depends on the aspect ratio and width ratio of the channel, the flow rate ratio of fluids, and the viscosity ratio of the phases in the presence of the shear-thinning biological nonNewtonian fluids such as red blood cells. In addition, we analyze the impact of the red blood cell concentration on the formation cycle. In the first part, we presented the experimental data of the red blood cell droplet evolution through the analysis of high-speed videos. During this analysis, we tracked several operational parameters such as droplet volume, the spacing between droplets, generation frequency by varying the flow conditions of fluids, and the geometrical designs of the T-junction. Our analysis reveals that unlike other non-Newtonian fluids, where the fourth stage exists (stretching stage), the formation cycle consists of only three stages: lag, filling and necking stages. Based on the detailed analysis of each stage, a mathematical model is developed to predict the final volume of the red blood cell droplets in the second part, which can be utilized in sensitive biochemical assay applications for future studies. In the second part, we analyzed the three stages of single cycle of the droplet formation and developed a mathematical model that describes the performance of the T-junction generators for biological non-Newtonian fluids (i.e., red blood cells - (RBCs)). The model integrated with a detailed analysis of the geometrical shape of the droplet during the formation process and combined with analysis of a force balance and a Laplace pressure balance to define the penetration depth and the critical neck thickness of the droplet. This analysis captures the influence of the governing dimensionless parameters (i.e., channel width and height, flow rate ratios, and fluid viscosities). The performance of the model was validated by comparing the operational parameters (droplet volume, the spacing between the droplets and the generation frequency) with the experimental data across the range of these dimensionless parameters. The model matches well with the experimental results as data falls within 20% of the predicted values of the droplet volume. The third part of this study focuses on the development of the biochemical assay using a droplet-based microfluidic system. This study presents Influenza A virus/virus-like particles (VLPs) quantification by running hemagglutination assay (HA Assay) in a dropletbased microfluidic system. VLPs are genetically engineered non-infectious particles, which have proteins to mimic the original virus but lack of genetic material to infect host organisms. Therefore, VLPs are good candidates for vaccine production. To determine the final dosage of VLPs in the vaccine, HA assay is done using 96-well plates. In this assay, diluted particles mixed with the target RBCs and the aggregation takes 4 hours to finalize. Although this method is a common procedure, longer reaction time, cross-contamination and human errors are the major drawbacks of this system. To eliminate these disadvantages, a droplet-based HA assay was developed. In this study, it was shown that the reaction time dropped to 4-10 seconds due to small diffusion length in droplets, the cross-contamination was prevented due to the compartmentalization nature of droplets, and the aggregation reaction was detected by the image analysis to eliminate human error.