Autonomous Driving at Intersections: A Critical-Turning-Point Approach for Planning and Decision Making 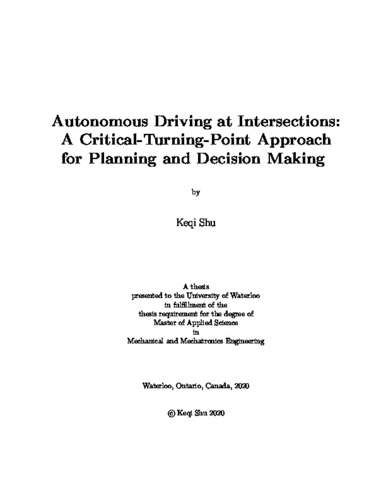 Left-turning at unsignalized intersection is one of the most challenging tasks for urban automated driving, due to the various shapes of different intersections, and rapidly changing nature of the driving scenarios. Many algorithms including rule-based approach, graph-based approach, optimization-based approach, etc. have been developed to overcome the problems. However, most algorithms implemented were difficult to guarantee the safety at intersection scenarios in real time due to the large uncertainty of the intersections. Other algorithms that aim to always keep a safe distance in all cases often become overly conservative, which might also be dangerous and inefficient. This thesis addresses this challenge by proposing a generalized critical turning point (CTP) based hierarchical decision making and planning method, which enables safe and efficient planning and decision making of autonomous vehicles. The high-level candidate-paths planner takes the road map information and generates CTPs using a parameterized CTP extraction model which is proposed and verified by naturalistic driving data. CTP is a novel concept and the corresponding CTP model is used to generate behavior-oriented paths that adapt to various intersections. These modifications help to assure the high searching efficiency of the planning process, and in the meanwhile, enable human-like driving behavior of the autonomous vehicle. The low-level planner formulates the decision-making task to a POMDP problem which considers the uncertainties of the agent in the intersections. The POMDP problem is then solved with a Monte Carlo tree search (MCTS)-based framework to select proper candidate paths and decide the actions on that path. The proposed framework that uses CTPs is tested in several critical scenarios and has out-performed the methods of not using CTPs. The framework has shown the ability to adapt to various shapes of intersections with different numbers of road lanes and different width of median strips, and finishes the left turns while keeping proper safety distances. The uses of the CTP concept which is proposed through human-driving left-turning behaviors, enables the framework to perform human-like behaviors that is easier to be speculated by the other agents of the intersection, which improves the safety of the ego vehicle too. The framework is also capable of personalized modification of the desired real-time performance and the corresponding stability. The use of the POMDP model which considers the unknown intentions of the surrounding vehicles has also enabled the framework to provide commute-efficient two-dimensional planning and decision-making. In all, the proposed framework enables the ego vehicle to perform less conservative and human-like actions while considering the potential of crashes in real-time, which not only improves the commute-efficiency, but also enables urban driving autonomous vehicles to naturally integrate into scenarios with human-driven vehicles in a friendly manner