The Jewish Mother of the Gentiles: Paul and Maternal Imagery in Galatians 4 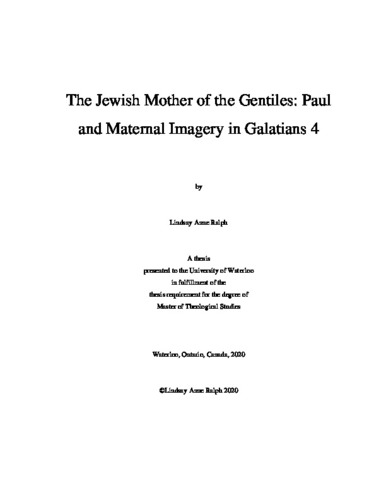 In Gal 4:19, Paul likens himself to a mother who is “again in the pain of childbirth until Christ is formed” within the Galatian congregation. Paul then follows this maternal self-declaration with an extended allegory focused upon the matriarchs in the Abrahamic narrative. Galatians is notably an epistle which is primarily concerned with circumcision and Paul’s insistence that gentiles should not be circumcised to be part of the Israel of God (Gal 6:16). Yet Paul, in crafting his argument to persuade the (male) Galatians to remain uncircumcised, relies upon female, maternal imagery which reaches its crescendo in Gal 4 with the above-mentioned passages. Why would Paul rely upon feminine imagery in the climax of his argument against circumcision, which is a Jewish male identity marker? This thesis is a socio-rhetorical examination of Paul’s maternal imagery in Gal 4, and I contend that Paul chose motherhood for the height of his argument because it was the most rhetorically persuasive image which would enable Paul to both affirm the gentile Galatians’ status as children of God while also addressing the Galatians’ social context. Maternal imagery allowed Paul to utilize ancient constructions of maternity to defend his gospel and apostolic calling, while also communicating relationship dynamics that existed between Paul and the church. Once Paul establishes himself as a mother to the congregation, he uses the Abrahamic matriarchal allegory to argue in favour of the gentiles’ status as children of the promise, heirs of Abraham, and born of the free woman. Paul insists that physical identity markers are contrary to the gospel of Christ (for gentiles) and are indistinguishable from the Galatians’ former cultic life. Instead, the Galatians must be animated by God the Father and accept Paul as the “free mother” who birthed them to embrace their identity as a divergent line of Abrahamic descent.