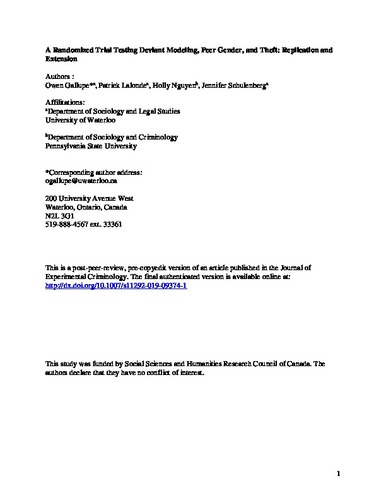 Objectives: Replicate previous experimental findings on the causal effect of deviant peer modeling and assess whether the gender of peer models is an important determinant of theft. Methods: A randomized control trial (n=329 university students) in which participants were randomly placed into one of four deviant peer modeling groups (control, verbal prompting, behavioral modeling, verbal prompting plus behavioral modeling) and one of three confederate gender similarity groups (same gender, different gender, mixed gender) (4x3 factorial design, equal randomization). The outcome was theft of a gift card. Each session included two confederates and a single participant. This feature reduced measurement error over more common approaches where groups of participants take part in the study at the same time and in which uncontrolled interactions and/or threshold effects may act as confounders. Results: Participants were more likely to steal when exposed to confederates who behaviorally modeled theft (15.1% stole) or offered verbal support for theft and modeled it (11.1%) compared to controls (2.5%) or when confederates only talked about stealing (1.2%) (p=.001). Participants exposed to same gender peers (7.3%) were as likely to steal as those exposed to different gender peers (5.5%) or mixed gender peers (9.9%) (p=.464). Conclusions: Behavioral modeling was found to be an important determinant of theft. This replicated previous research in the area and offers arguably the strongest support to date for the influence of deviant peer modeling. Peer gender, however, was not found to be an important etiological component of theft. External validity is a limitation.