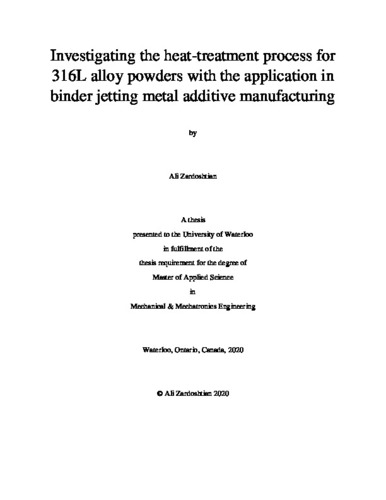 Metal binder jetting (BJ) is a manufacturing process which involves the deposition of metal powder and an adhesive liquid binder layer-by-layer to fabricate metal parts. BJ as-printed parts are in essence loose particles bound together and must be sintered at high temperatures to create dense structures. It is catching industry’s attention since it is fast, cost-effective and enables fabrication of more complex geometries in comparison to other manufacturing processes such as casting and conventional powder metallurgy. However, BJ is a relatively new technology and requires more -pre and -post process development to enhance its applicability for the industry. One of the major concerns in BJ technology is the porosity left after sintering the green parts. This strongly depends on the sinterability of the metal powder. Therefore, this thesis focuses to evaluate the effect of powder particle size distribution (PSD), green density of printed samples and thermal treatment on the sinterability of 316L powders. Three different atomized 316L powders with different PSD are selected for this thesis including a unimodal fine powder and two bimodal coarse powders. Prior to starting sintering experiments, thermal analysis of metal powders and polymeric binder is conducted with differential scanning calorimetry and thermal gravimetric analysis, respectively. The decomposition temperature of the binder and the solidus temperatures of the powders were found out to create a sintering schedule which can remove the binder effectively and guarantee sub-solidus sintering. An analytical model for the densification was used to construct the master sintering curve (MSC) to compare the effect of PSD and green density on the consolidation. It was found out that the apparent activation energy of sintering was not affected by the PSD and the green density. The microstructural analysis with SEM showed that sintering occurred through solid stated diffusions in austenite and δ-ferrite. The kinetics of sintering changed slightly with PSD. Powder with a fine unimodal PSD required less work to activate sintering and had a faster sintering rate which lead to the highest density (95%). Fine bimodal powder had also similar kinetics while coarses bimodal powder required more work to initiate the sintering. A slower densification rate resulted in lower relative density (92%). The green density had more profound effect on the sinterability of powders. The work required to trigger sintering was increased by 17.5 % when the green density was reduced from 65% to 53%. This was much higher than what was observed when the PSD was modified. As a reference, the difference in the onset of sintering for the UMC and BMC is only 12.2%. Decreasing the green density also reduced the densification rate and leads to a much lower final density. The final microstructure was analyzed using scanning electron microscope equipped with an Energy-dispersive detector. Detrimental sigma-phase was identified in the sintering 316l microstructure. A solutionizing post-heat treatment has been developed to re-solution the sigma-phase into ferrite. The work done on the powder properties and green density will be used as the basis for further studies on densification. The BJ process development will be undertaken by optimizing the printing parameters. Sintering schedules will be revisited to reduce the volume fraction of detrimental σ-phase.