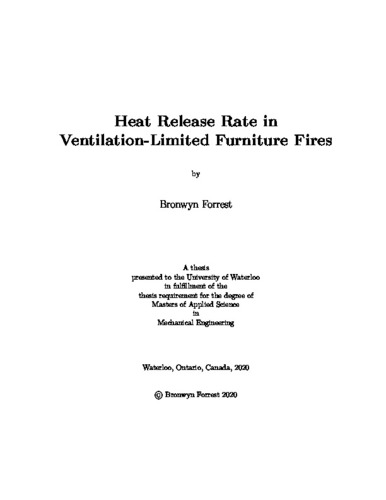 There has always been motivation to investigate and understand fires with hopes of implementing useful changes to fire safety procedures, standards, codes, and education. Due to the unpredictability and destructive nature of fires, the concerns that fires pose to societies are ever changing as communities, cities and populations grow and evolve. As a result, the scientific community strives to continually grow and evolve with the changes, therefore driving a necessity for expanding our wealth of knowledge and understanding of fires. The purpose of this research is to further expand on our very limited scientific knowledge of the impacts of ventilation-limited environments on the heat release rate of furniture fires, specifically in a modern residential context. For this, data from a series of nine large-scale fires initiated in the living room of a multi-compartment, two-storey burn structure were analyzed and interpreted to determine key characteristics of the environment as it evolved during the fires. The structure was well sealed to mimic the shift in modern home design towards less air leakage and higher energy-efficiency resulting in ventilation-limited fires and setting the current experiments apart from the much-studied well-ventilated compartment fires. Fires were fueled by three distinct types of sofa, each custom built of a foam and fabric combination that complied with different furniture flammability standards. Ignition at one end of the couch facilitated comparison of fire spread across each sofa. The modern residential context here, then, refers both to the use of modern furniture materials and to newer methods of residential construction as these have an impact on fire growth, development, and spread as well as the chemistry and physics of a compartment fire environment. One of the most important parameters in fire safety is the heat release rate of the fire. It is such an important measure because it is essentially the power of the fire and can provide valuable information as to how the fire will grow, spread and develop. As such, heat release rate is used as an input into many computational and numerical models which are then used to conduct hazard and risk assessments that impact fire safety decisions such as evacuation. Due to the importance of this input, there has to be assurance that the magnitude of the peak heat released, or the time-resolved heat release rate curve of a material are calculated with confidence and account for specific characteristics of the fuel-source and environmental conditions. One goal of this research is to provide comparisons of existing methods for the calculation of heat release rate of furniture fires. Also included in this work is a newly developed image analysis program that uses the video footage recorded from the tests to compute the height and width of the flames, which are used as inputs into several of the selected numerical models. Information with regards to the physics that occur in a ventilation-limited fire environment fueled by upholstered furniture as the primary fuel source and the interactions between the changing environment and the heat release rate are also discussed. Specific to the enclosure dynamics, some key results were found. First, temperature profiles varied throughout the structure. The environment stratified in areas closest to the fire, whereas areas further away remained more uniform in temperature. Smoke movement throughout the structure, when coupled with gas sensor data, indicated interesting oxygen transport patterns that supported burning of the couches throughout the fires. As such, the stair between floors was an important connection, and the smoke layer also played a key role as it interfered with the fire plume and contributed radiation to the surfaces in the enclosure. With respect to calculated values of heat release rate, there was good agreement across numerical methods; mass loss rate and the predictive cone calorimeter to full-scale couch peak heat release rate method described in this work; however, the Babrauskas methods and Heskestad's flame height correlation did not always produce comparable results. The non-fire-retardant couch consistently had the highest peak heat release rate, followed by the lightly-fire-retardant couch and lowest was the fire-retardant couch. In summary, this body of work compares values of heat release rate determined using available calculation methods and correlations used by practicing engineers as inputs into models. In doing so, it also provides new information on the characteristics and impacts of ventilation-limited environments on fire growth, development, smoke movement and heat release rate of furniture fires. Based on the results, the need for much better understanding of the effects of a ventilation-limited environment on the overall burning characteristics of furniture and ensuing physics of the fire is highlighted, which in turn, would guide choices for appropriate calculation methods for the heat release rate and other important characteristics of a range of fuel sources across different fire scenarios.