An Inverse Correlation between Corn Temperature and Nitrogen Stress: A Field Case Study 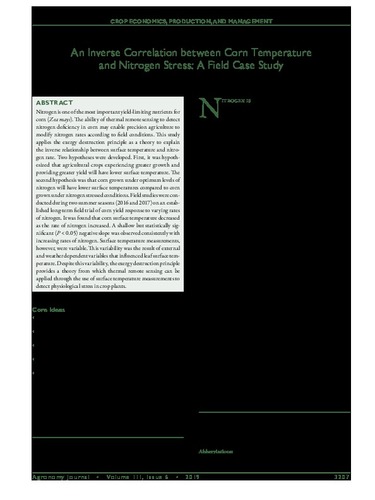 Nitrogen is one of the most important yield-limiting nutrients for corn (Zea mays). The ability of thermal remote sensing to detect nitrogen deficiency in corn may enable precision agriculture to modify nitrogen rates according to field conditions. This study applies the exergy destruction principle as a theory to explain the inverse relationship between surface temperature and nitrogen rate. Two hypotheses were developed. First, it was hypothesized that agricultural crops experiencing greater growth and providing greater yield will have lower surface temperature. The second hypothesis was that corn grown under optimum levels of nitrogen will have lower surface temperatures compared to corn grown under nitrogen stressed conditions. Field studies were conducted during two summer seasons (2016 and 2017) on an established long-term field trial of corn yield response to varying rates of nitrogen. It was found that corn surface temperature decreased as the rate of nitrogen increased. A shallow but statistically significant (P < 0.05) negative slope was observed consistently with increasing rates of nitrogen. Surface temperature measurements, however, were variable. This variability was the result of external and weather dependent variables that influenced leaf surface temperature. Despite this variability, the exergy destruction principle provides a theory from which thermal remote sensing can be applied through the use of surface temperature measurements to detect physiological stress in crop plants.