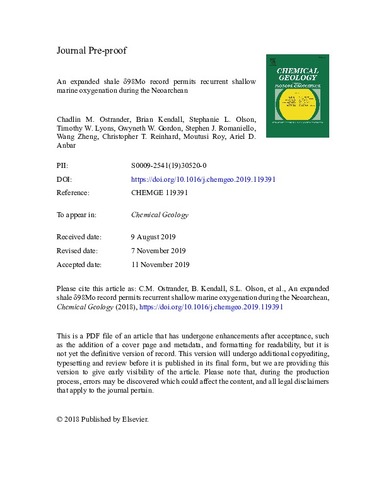 Multiple attempts have been made using the ancient shale record to track the molybdenum isotope composition (δ98Mo) of seawater during the final two-hundred million years of the Archean Eon (2.7 to 2.5 billion-years-ago, or Ga). This seawater δ98Mo value is important because it should have scaled with levels of ocean oxygenation during the runup to the Great Oxidation Event (GOE). Unfortunately, however, it is difficult to tell if the majority of the existing late-Archean shale δ98Mo record tracks an ancient seawater value. Here, we further attempt to track pre-GOE seawater δ98Mo using an expanded and well-characterized shale sample set from Western Australia (Jeerinah, Wittenoom, and Mt. Sylvia formations) and South Africa (Nauga and Klein Naute formations). Most importantly, and in contrast to most previous Mo isotope studies of similarly aged shales, local redox conditions for our shales have been independently constrained using the iron (Fe) speciation proxy and bottom water Mo contents at the time of deposition have been qualitatively estimated using Mo/TOC ratios. Local redox conditions and bottom water Mo availability are important parameters because transfer of the seawater δ98Mo to sediments today is shown to be dependent on these conditions. According to our updated sedimentary δ98Mo record, seawater δ98Mo commonly exceeded 1.0‰ between ~2.69 Ga and 2.50 Ga. In order to drive such a heavy seawater δ98Mo, there must have been a marine sink with a strong preference for lighter-mass Mo isotopes frequently present over this timeframe. The operation of some anaerobic processes in late-Archean marine settings could theoretically explain the heavier seawater δ98Mo. Such processes are known to promote the preferential retention of lighter-mass Mo isotopes in marine sediments today (e.g., interactions between Mo and organic matter or the formation of thio-complexes). Alternatively, or in addition, adsorption of lighter-mass Mo isotopes to Fe and Mn oxide minerals formed in oxygenated marine environments can explain the heavier seawater δ98Mo. A compilation of previous work suggests that oxygenated shallow marine environments were fairly common during the late-Archean, and thus Mo adsorption to Fe-Mn oxides formed in these settings probably played an important role in driving heavy seawater δ98Mo over this timeframe.