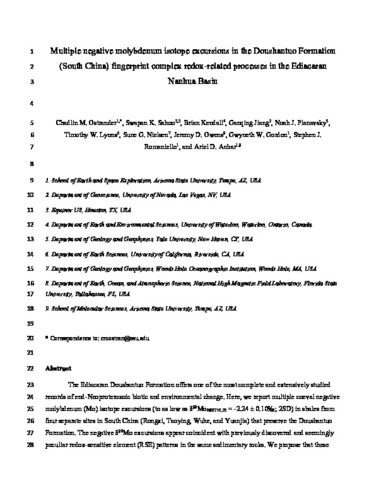 The Ediacaran Doushantuo Formation offers one of the most complete and extensively studied records of end- Neoproterozoic biotic and environmental change. Here, we report multiple coeval negative molybdenum (Mo) isotope excursions (to as low as d98MoNIST+0.25 = -2.24 ± 0.10‰; 2SD) in shales from four separate sites in South China (Rongxi, Taoying, Wuhe, and Yuanjia) that preserve the Doushantuo Formation. The negative d98Mo excursions appear coincident with previously discovered and seemingly peculiar redox-sensitive element (RSE) patterns in the same sedimentary rocks. We propose that these geochemical trends can be explained by some combination of (a) enhanced local marine oxygenation in the sedimentary basin where the Doushantuo Formation was originally deposited (the Nanhua Basin) and (b) changes in the degree of connectivity between this paleo basin and the open ocean. Enhanced local marine oxygenation, by exposing more sediments in the Nanhua basin to H2S-poor conditions, could have hindered quantitative tetrathiomolybdate formation within these sediments. Local marine oxygenation could have also stimulated the operation of a Mn oxide shuttle. Today, both of these processes are shown to promote the retention of lighter-mass Mo isotopes in sediments and also govern RSE enrichment patterns. Alternatively, or in addition, the Nanhua Basin may not have maintained an uninterrupted connection with the open ocean during the entirety of the Ediacaran Period. The negative d98Moexcursions occur coincident with sea level highstands that could have also exposed more sediments in the basin to H2S poor conditions and/or catalyzed the operation of a local Mn oxide shuttle. When trying to infer temporal changes in ancient global ocean redox, it is important to consider the influence of sea level changes and associated variations in local depositional conditions on stratigraphic trends in RSE enrichments and isotope compositions.