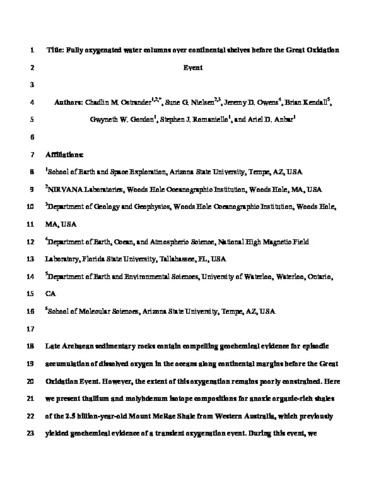 Late Archaean sedimentary rocks contain compelling geochemical evidence for episodic accumulation of dissolved oxygen in the oceans along continental margins before the Great Oxidation Event. However, the extent of this oxygenation remains poorly constrained. Here we present thallium and molybdenum isotope compositions for anoxic organic-rich shales of the 2.5-billion-year-old Mount McRae Shale from Western Australia, which previously yielded geochemical evidence of a transient oxygenation event. During this event, we observe an anticorrelation between thalium and molybdenum isotope data, including two shifts to higher molybdenum and lower thalium isotope compositions. Our data indicate pronounced burial of manganese oxides in sediments elsewhere in the ocean at these times, which requires that the water columns above portions of the ocean floor were fully oxygenated—all the way from the air–sea interface to well below the sediment–water interface. Well-oxygenated continental shelves were probably the most important sites of manganese oxide burial and mass-balance modelling results suggest that fully oxygenated water columns were at least a regional-scale feature of early Earth’s oceans 2.5 billion years ago.