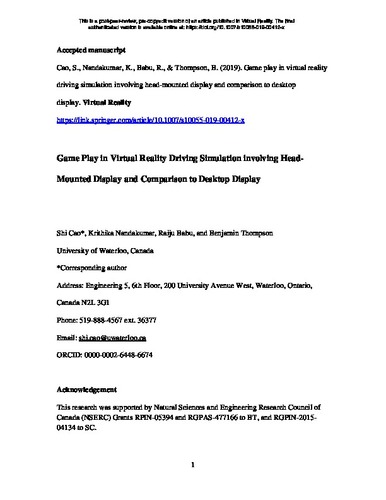 Previous studies have reported the effect of driving simulator games on simulator sickness and eye symptoms experienced by users; however, empirical results regarding the game experience using commercial virtual reality head-mounted displays (VR-HMDs) are lacking. We conducted an experiment where participants played a driving simulator game (Live for Speed) displayed through an Oculus Rift DK2 for up to 120 min. Game play duration was recorded. Game experience was surveyed using questionnaires about simulator sickness, eye symptoms, and game engagement. The results showed that the average game play duration for this specific driving simulation game was approximately 50 min. Simulator sickness was negatively correlated with affordable play duration using the VR-HMD. We also found that age was negatively correlated with game play duration. There were no differences between those who did and did not wear frame glasses. In addition, we compared the VR-HMD game play and traditional desktop LCD game play, in terms of simulator sickness, subjective eye symptoms, game engagement, and game performance. The results showed that VR-HMD game play in the driving simulation game was similar to the experience using the desktop LCD display, except for a moderately increased level of simulator sickness. These findings provide new data about VR-HMD’s impact on game play and will inform game designers, players, and researchers for their choices and decisions on proper game duration and the type of devices.