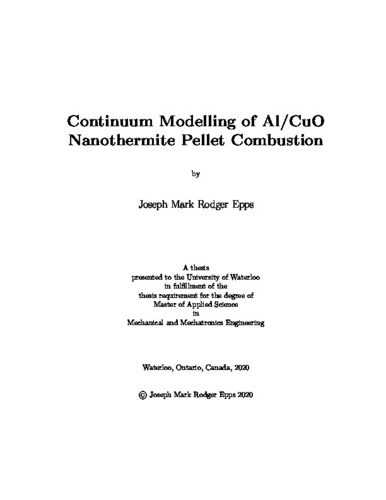 Nanothermite mixtures are made up of nano-sized metallic fuel and inorganic oxidizer components. As this solid mixture represents a metastable intermolecular composite, an increase in nanothermite temperature can initiate a highly exothermic reaction. As the oxidation takes place at the surface of nanoparticles, the nanothermite composite is characterized by a very high reactivity compared to other type of solid propellants such as their micro-sized counterparts. Furthermore, as their geometries and molecular make up are highly tuneable, so are their burning characteristics. These characteristics are well suited for a number of engineering applications such as pyrotechnics, igniters, explosives, and propellants. Literature contains many studies with experimental results for different nanothermite mixtures and in different setups such as consolidated pellets. Numerical studies are limited and have focused on quantifying the reaction rather than the aggregate effects of the pellet. When the nanothermite mixture of powders is pressed into a pellet form, porosity arises due to the imperfect contact between the particles. Literature does accept that burning occurs primarily due to conduction or convection; the later of which is dominant when porosity is high (lightly pressed). This thesis will introduce a continuum method of modelling the reaction propagation mechanisms in Al/CuO nanothermite pellets following the experimental results from a previous University of Waterloo graduate student, now doctorate holder. Some researchers have undertaken meta-scale models as an attempt to simulate the pellet and its governing processes. The modelling framework here will build on this by coupling the field of porous media to capture the porosity effects of the pellet. Al/CuO generates a significant amount of gas, which will play an important role in modelling the convective heat transfer. With that said, this framework can be extended to other gas generating nanothermite reactions. Reaction details are secondary to this study, so the reaction is modelled with a simplified reaction model. A non-dimensional analysis of this model was used to identify important characteristics of combustion to process the results. A Finite Volume Method was developed in Python to numerically solve the proposed model and obtain results. The results show a relationship between the burn rate and Peclet number that agrees well with experimental results. Burning regimes governed by conduction and convection were confirmed to be functions of packing density, however burn rate magnitudes fell short of most literature results at low packing density. Without being able to quantify the pore structure within the pellet, there is significant uncertainty in the parameters used to calculate porous media permeability and thermal conductivity.