Argument and Identity Change in the Atlantic Security Community 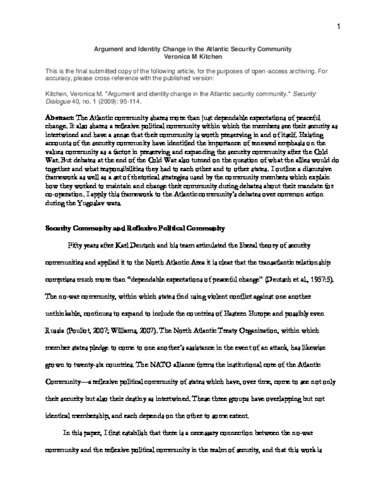 The Atlantic community shares more than just dependable expectations of peaceful change. Its members also share a reflexive political community they sense is worth preserving and a view that their security is intertwined. Existing accounts of the Atlantic security community have identified the importance of renewed emphasis on common values as a factor in preserving and expanding the security community after the Cold War. But, debates at the end of the Cold War also turned on the question of what the allies would do together and what responsibilities they had to each other and to other states. This article outlines a discursive framework and a set of rhetorical strategies used by members of the Atlantic community that explain how they worked to maintain and change their community during debates about their mandate for cooperation. This framework is then applied to the Atlantic community's debates over common action during the Yugoslav wars.