The Role of Values and Beliefs in Small-scale Fishery and Dried Fish Production: An Exploration of Social Well-being in Fishing Communities of Sagar Island (Indian Sundarbans) 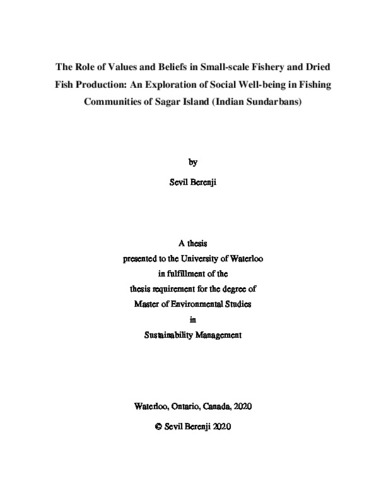 This research highlights the diverse values and beliefs associated with small-scale fisheries and dried fish productions and their role in strengthening social wellbeing of fishing communities. According to the Food and Agriculture Organization of the United Nations (FAO), small-scale fisheries are “firmly rooted in local communities, traditions and values”. The strength in these local level values and beliefs determines the resilience of the fisheries system. However, several small-scale fisheries around the world are experiencing severe erosion in their long-held values and beliefs due to the adverse impacts from multiple drivers, e.g., globalization, commercialization, privatization, policy changes and climate change. In addition to the resulting vulnerabilities, this has led to systematic marginalization of these fishing communities who find it difficult to respond due to the weakening of their traditional values and beliefs as a source of strength and action. On this backdrop, this research presents an empirical investigation of the role of values and beliefs in small-scale fishery (SSF) and dried fish (DF) production by exploring their connections to the social wellbeing of fishing communities. The purpose of this research is to examine the connections between ‘values and beliefs’ and ‘social wellbeing’ in fishing communities, with specific attention to the multiple drivers of change influencing those values and beliefs. Three specific objectives guide this research: (1) To identify the diverse values and beliefs and their meanings that are hidden in the SSF and DF production community groups; (2) To define the key drivers of values and beliefs and how they have affected the values and beliefs of the SSF and DF production community groups; and (3) To examine how the values and beliefs of the SSF and DF production community groups are connected to their social wellbeing (i.e., material, subjective, and relational wellbeing). The study was conducted in the fishing communities of Sagar Island, which is situated on the south-west edge of the Sundarbans region, India. The study used a largely qualitative and inductive methodology that combined secondary literature review with primary data collected through participant observations, semi-structured interviews (n=45), focus group discussions (n=33 people / 2 FGDs), and household surveys (n=45). Major findings from this research indicate that, first, a growing number of life loss and economic loss experienced by community members dealing with small-scale fishery and dried fish production of Sagar Island have made them realize the need for ecosystem conservation. This realization is stronger among those who are under the direct influence of ecosystem changes. The fishing community also acknowledged that failure in accepting and treating the extended primary group (outsiders) properly would lead to life-threatening conflicts (e.g., social disorder) and would erode the values related to social relationships (e.g., peacefulness, benevolence) eventually. It is this realization, in the backdrop of current economic uncertainties faced by SSF and DF production, have led its members to subordinate the potential religious or caste discriminations and built upon positives such as strong union and solidarity within community members. Second, the diverse challenges that existed in the Island (e.g., the vicious cycle of indebtedness to local moneylenders, depletion of fish stock after the emergence of fishing trawlers etc.) are forcing community members towards more of temporary migration in search of a more reliable livelihood option. This process weakens the traditional notion of local ‘fishing community’ and ‘fisher family’, erode values related to the place (e.g., attachment to place), and could gradually lead to complete human-environment disconnection in further stages. Third, for the majority of fishery households, the relationship between economy-related values (e.g., wealth) and social wellbeing is very strong as the majority of the time, they stay trapped in poverty. Furthermore, relationships among fishing members also influence access to material, and non-material benefits people derive from each other. Ultimately, the results of this thesis indicated that the values and beliefs of a fishing community could provide valuable insights to achieve improved management of fisheries’ resources. It can also help identify the present threat to small scale fisheries and dried fish production, and in turn will bolster the community’s social wellbeing and their positive response to social-ecological changes.

Sevil Berenji (2020). The Role of Values and Beliefs in Small-scale Fishery and Dried Fish Production: An Exploration of Social Well-being in Fishing Communities of Sagar Island (Indian Sundarbans). UWSpace. http://hdl.handle.net/10012/15983