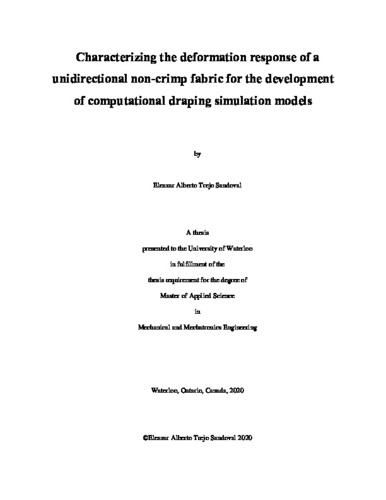 In several countries around the world, including Canada, government incentives have been put in place to improve the fuel efficiency of vehicles and reduce CO2 emissions. Improvements in composites manufacturing technology, such as high-pressure resin transfer molding and quick curing resins, makes it practical to lightweight through the incorporation of carbon fiber reinforced polymer (CFRP) parts into the body-in-white structure of vehicles. However, the technology has only been realized for small production rates and is currently in the developmental phase towards full automation for high-volume production. Hence, there is a need to developed and calibrate fabric draping simulations models to support this effort and enable the design of CFRP production processes that incorporate cost-effective fabric reinforcement material, such as heavy tow unidirectional non-crimp fabric (UD-NCF). This work aimed to expand the understanding of the forming behaviour of UD-NCFs, within the context of the development of automation capabilities for fabric preforming. The investigation focused on the characterization of the macroscale response of a UD-NCF, including an investigating of associated local deformation mechanisms, to calibrate a macroscale constitutive model and support the development of a computational fabric draping simulation model. The fabric characterization consisted of a series of experimental tests that measured the fabric in-plane and out-of-plane deformation responses reminiscent of draping operations. The tests were conducted with respect to the carbon fiber (CF) tow longitudinal and transverse directions. The experimental tests conducted were the longitudinal, transverse, and off-axis extension tests; the picture frame test (PFT); the cantilever; and friction sliding test in both material directions. The longitudinal extension and bending stiffness were found to be significantly higher than the respective transverse extension and bending stiffnesses. Also, at low strains, the fabric transverse extension stiffness was found to be negligible until crimping in the transverse glass fibers was removed. Regarding the fabric friction response, the coefficients of friction were higher on the stitching fabric side and when sliding occurred in the longitudinal fabric direction. Also, an investigation of the fabric mesoscale deformation mechanisms revealed the generation of CF tow undulations and intertow gapping, mainly generated by deformation of the stitching, when the fabric was subjected to transverse extension and shear deformations. To address difficulties associated with sliding of the glass fibers at the clamps during extension and PFT testing a clamping design was proposed that fully restrained the glass fibers, while at the same time preventing specimen damage at the grips. 2D DIC was used to study the development of strains in the fabric during all in-plane experimental tests. Challenges associated with fabric surface texturization and strain measurements through digital image correlation were investigated and addressed to improve the optical strain analysis. A surface texturization technique with an oil-based paint was implemented in all tests as it created high contrast speckle patterns on the fabric surface and the least amount of fabric deformation interference when compared with two other surface texturization techniques. Using the experimental results, a macroscale material model, chosen from the existing material model library available in the commercial finite element software LS-DYNA® was calibrated to simulate forming operations. The material model was calibrated for in-plane and out-of-plane deformation modes in accordance with the experimental tests conducted. The material model parameters were identified by simulating the experimental tests conducted during the fabric characterization process and an iterative inverse parameter identification approach until a good correlation was obtained between the numerical simulations and the corresponding physical tests. In most cases, piecewise linear functions were used to approximate the experimental test data before entering into the material model. Finally, to validate the calibration of the material model, a single-layer 100-mm diameter hemispherical test with a displacement controlled punch was performed and simulated using the calibrated material model. In addition to the calibrated material model, results from the friction tests were used to define contact boundary conditions in the draping simulation model. A good agreement was obtained between the simulation predictions of macroscopic deformations observed in the fabric, including contour shape and wrinkling, and the experimental results.