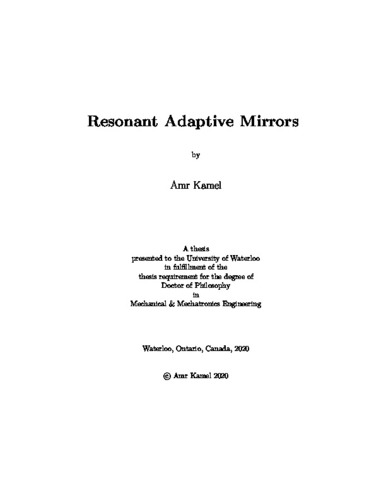 Deformable mirrors (DMs) are integrated into adaptive optical (AO) systems to compensate for wavefront aberrations. These aberrations degrade the image resolution of telescopes, microscopes, ophthalmoscopes, and optical coherent tomographs. The objective of the DM in these applications is to compensate for wavefront aberrations. Continuous and segmented DMs utilize a variety of mechanisms such as electrostatic, piezoelectric, and electromagnetic actuation. Micro-electromechanical systems (MEMS) DMs have the advantages of low cost, low power consumption, and high electrode density. As the electrode count increases, the possibility of the desired modes corresponding to the Zernike modes appearing increases. However, the complexity of the static actuation also increases. In ophthalmology, fth order Zernike modes are used to categorize the aberrations induced by the human eye. These aberrations would degrade the image resolution of the retina during laser scanning. Therefore, a dynamically continuous DMs were developed and actuated at a natural frequency corresponding to the desired Zernike mode. The actuations would drive the mirror plate to deform into the shape of the desired mode. Multiple modes corresponding to low- and high-order Zernike modes were obtained. Resonant DMs exploit the dynamic ampli cation available at natural frequency's in order to reduce voltage and power requirements. This will also reduce the requirements for spatial control of individual electrodes' voltage. However, the use of circular mirror plates to create the electromechanical modes has led to the appearance of degenerate modes (pairs of almost identical modes with closely spaced frequencies). Electrostatic elds were designed to separate those modes and help break coupling between them. The elds employ selectively, actuating some of the electrodes under the DM while grounding the rest. An AC voltage was applied to selective scheme of electrodes in order to induced mode shapes that are corresponding to the Zernike modes. This design relies on a new technique which uses pulsed laser scanning instead of continuous laser scanning. The proposed DM was designed and fabricated using a Micra-GEM fabrication process. Simulations using the nite element method (FEM) software COMSOL were used in order to determine the natural frequencies and mode shapes, and to separate degenerate modes natural frequencies by applying electrostatic elds that increase the di erence between them. Characterization of the DM was conducted using laser Doppler vibrometer to identify the mode shapes and its natural frequencies experimentally. The stroke measurements of the target DM were shown as a function of frequency and amplitude. In addition, RMS error measurements were used as a comparison between DM modes and there corresponding Zernike mode. The aim of this research was to over come the in uence function due to mechanical coupling in the continuous DMs. In uence function requires di erent voltages that apply to electrode scheme. Therefore, static actuation of the DMs rely on a complex driving circuits. Resonant DMs eliminate the e ect of the in uence function by triggering the mirror via its natural frequencies. They reduce the number of red electrode scheme by applying single voltage to the electrodes. As a result, they reduce the complexity of the driving circuits that require to control its shape. This research requires a new technique of using a pulsed laser instead of a continuous laser for the proposed DM. This may lead to manipulation of the optical laser signal using the mirror as a part of the signaling process. This should be completed by synchronizing the frequencies of both the DM and the laser to produce a high resolution image of the retina.