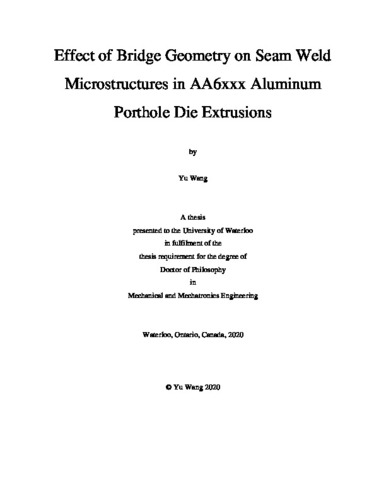 A series of porthole die extrusion trials were conducted with AA6xxx aluminum alloys to understand the influence of die geometry (bridge shape and welding chamber height), extrusion process parameters (ram speed) on the weld seam formation of the extrudate and its tensile properties in the natural aged (T4) and artificially aged (T5 and T6) conditions. In addition, a mathematical model was developed of the porthole die extrusion process to complement the experimental trials and provide quantitative information on the thermal mechanical history experienced by the material as a way to help understand the linkages between the extrusion process history, the microstructure formed and the final mechanical properties. The extrusion trials were conducted at Rio Tinto’s facility in Jonquiere, Quebec using their instrumented extrusion press to produce an extruded strip that had a weld seam along its length. In these trials, different die geometries were used to vary the shape of the bridge (flat versus streamlined) and the weld chamber height. In addition, a range of ram speeds was used to more fully understand the effect that extrusion speed has on the formation of the weld seam. These trials were conducted for three different compositions of AA6xxx aluminum alloys where the amount of Mn and Cr additions were altered (0Mn, 0.5Mn and 0.5Mn0.15Cr) to increase the number of dispersoids in the matrix and inhibit the recrystalize process. The mathematical model of the porthole die extrusion process was developed using the commercial Finite Element Method (FEM) package DEFORM 3D. The results from the model predictions were verified by comparing them to the measured extrusion breakthrough load and comparing model-predictions of material flow to a slice of the material part way in the extrusion process to show the presence of dead metal zones. The experimental results indicate that the microstructure and texture that formed along the weld seam was different than the matrix in cases where the final microstructure in the matrix was unrecrystallized or fibrous. The weld seam microstructure was strongly dependent on the shape of the bridge used and the weld chamber height. The extrusion simulation results, indicated the weld seams produced using a flat bridge experienced higher strains and temperatures during extrusion relative to a streamlined bridge. The simulation results also showed that the final weld seam experienced much higher cumulative strain and higher temperatures than the surrounding matrix material and these effects extended out a few millimetres on either side of the weld seam. The influence of ram speed on porthole die extrusion showed that as the ram speed increased several types of defects, such as edge cracking and a groove along the weld seam appeared on the surface of the extrudate. However, the final mechanical properties of the extruded profiles and the microstructure along the weld line did not appear to be significantly affected by ram speed. The effect of material composition on the weld seam properties was significant and for cases where the matrix material did not recrystallize and had a fibrous microstructure, tensile tests aided by Digital Image Correlation (DIC) revealed that the strain concentrated at the weld seam region at a very early stage of plastic deformation. Analysis revealed that this was related to the softer texture at the weld seam compared to the matrix. This led to a significantly lower elongation to failure compared to extruded samples without a weld seam. In contrast, for cases where the matrix material did recrystallize (0Mn), the microstructure and texture at the weld seam were similar to the microstructure and texture in the matrix. For these cases, the strain to failure was similar to samples extruded without a weld seam and failure did not occur at the weld seam. This research clearly showed that the extrudate weld seam tensile properties were related to the texture both at the weld seam and in the matrix of the extrudate and that the weld seam microstructure can be influenced by the die geometry during porthole die extrusion.