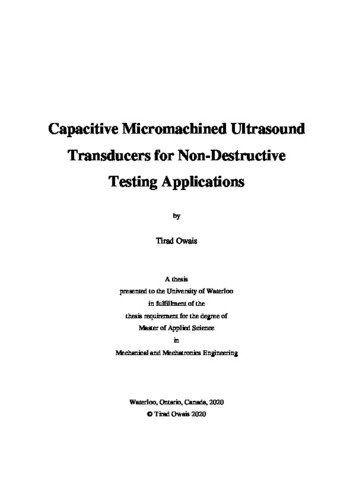 The need for using ultrasound non-destructive testing (NDT) to characterize, test and detect flaws within metals, led us to utilize Capacitive Micromachined Ultrasound Transducers (CMUTs) in the ultrasound NDT field. This is due to CMUT's large bandwidths and high receive sensitivity, to be a suitable substitute for piezoelectric (PZT) transducers in NDT applications. The basic operational test of CMUTs, conducted in this research, was carried out based on a pulse-echo technique by propagating acoustic pulses into an object and analyzing the reflected signals. Thus, characterizing the tested material, measuring its dimension, and detecting flaws within it can be achieved. Throughout the course of this research, the fundamental parameters of CMUT including pull-in voltage and resonance frequency were initially calculated analytically and using Finite Element Analysis (FEA). Afterward, the CMUT was fabricated out of two mechanically bonded wafers. The device's movable membrane (top electrode) and stationary electrode (bottom electrode) were made out of Boron-doped Silicon. The two electrodes were electrically isolated by an insulation layer containing a sealed gap. The CMUT was then tested and characterized to analyze its performance for NDT applications. In-immersion characterization revealed that the 2.22 MHz CMUT obtained a -6 dB fractional bandwidth of 189%, and a receive sensitivity of 31.15 mV/kPa, compared to 45% and 4.83 mV/kPa of the PZT probe. A pulse-echo test, performed to examine an aluminum block with and without flaws, showed success in distinguishing the surfaces and the flaws of the tested sample.