Can Message-Tailoring Based on Regulatory Fit Theory Improve the Efficacy of Persuasive Physical Activity Systems? 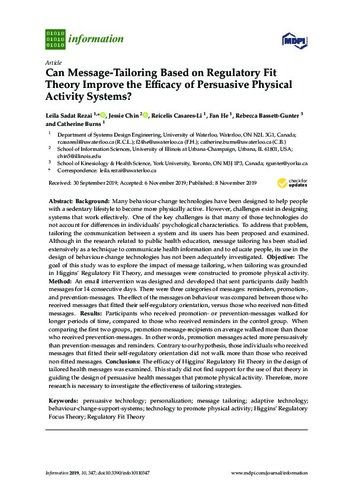 Background: Many behaviour-change technologies have been designed to help people with a sedentary lifestyle to become more physically active. However, challenges exist in designing systems that work effectively. One of the key challenges is that many of those technologies do not account for differences in individuals’ psychological characteristics. To address that problem, tailoring the communication between a system and its users has been proposed and examined. Although in the research related to public health education, message tailoring has been studied extensively as a technique to communicate health information and to educate people, its use in the design of behaviour-change technologies has not been adequately investigated. Objective: The goal of this study was to explore the impact of message tailoring, when tailoring was grounded in Higgins’ Regulatory Fit Theory, and messages were constructed to promote physical activity. Method: An email intervention was designed and developed that sent participants daily health messages for 14 consecutive days. There were three categories of messages: reminders, promotion-, and prevention-messages. The effect of the messages on behaviour was compared between those who received messages that fitted their self-regulatory orientation, versus those who received non-fitted messages. Results: Participants who received promotion- or prevention-messages walked for longer periods of time, compared to those who received reminders in the control group. When comparing the first two groups, promotion-message-recipients on average walked more than those who received prevention-messages. In other words, promotion messages acted more persuasively than prevention-messages and reminders. Contrary to our hypothesis, those individuals who received messages that fitted their self-regulatory orientation did not walk more than those who received non-fitted messages. Conclusions: The efficacy of Higgins’ Regulatory Fit Theory in the design of tailored health messages was examined. This study did not find support for the use of that theory in guiding the design of persuasive health messages that promote physical activity. Therefore, more research is necessary to investigate the effectiveness of tailoring strategies.