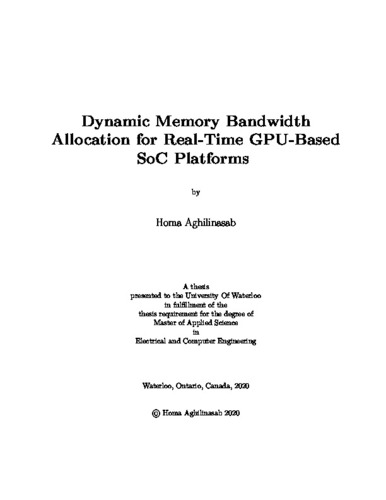 Heterogeneous SoC platforms, comprising both general purpose CPUs and accelerators such as a GPU, are becoming increasingly attractive for real-time and mixed-criticality systems to cope with the computational demand of data parallel applications. However, contention for access to shared main memory can lead to significant performance degradation on both CPU and GPU. Existing work has shown that memory bandwidth throttling is effective in protecting real-time applications from memory-intensive, best-effort ones; however, due to the inherent pessimism involved in worst-case execution time estimation, such approaches can unduly restrict the bandwidth available to best-effort applications. In this work, we propose a novel memory bandwidth allocation scheme where we dynamically monitor the progress of a real-time application and increase the bandwidth share of best-effort ones whenever it is safe to do so. Specifically, we demonstrate our approach by protecting a real-time GPU kernel from best-effort CPU tasks. Based on profiling information, we first build a worst case execution time estimation model for the GPU kernel. Using such model, we then show how to dynamically recompute on-line the maximum memory budget that can be allocated to best-effort tasks without exceeding the kernel’s assigned execution budget. We implement our proposed technique on NVIDIA embedded SoC and demonstrate its effectiveness on a variety of GPU and CPU benchmarks.