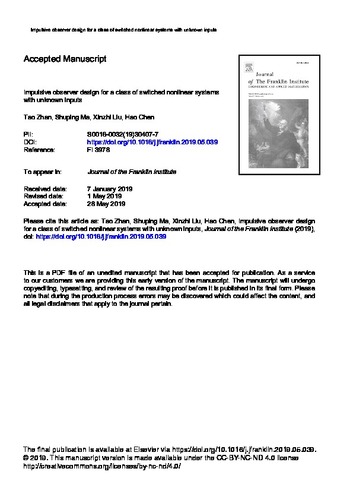 This paper investigates hybrid observer design of a class of unknown input switched nonlinear systems. The distinguishing feature of the proposed method is that the stability of all subsystems of the error switched systems is not necessarily required. First, an output derivative-based method and time-varying coordinate transformation are considered to eliminate the unknown input. Then in order to maintain a satisfactory estimation performance, an impulsive full-order and switched reduced-order observer are developed with a pair of upper and lower dwell time bounds and constructing time-varying Lyapunov functions combined with convex combination technique. In addition, the time-varying Lyapunov functions method is also used to analyze the stability of a class of error switched nonlinear systems with stable subsystems. Finally, two examples are presented to demonstrate the effectiveness of the proposed method.