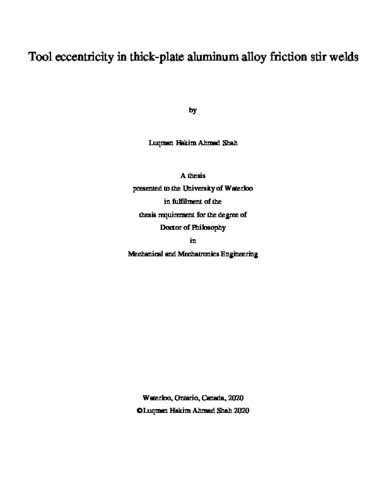 Tool eccentricity, i.e. the wobbling motion of a milling tool during rapid rotation caused by its slight offset from the spindle rotational axis, has been given very limited attention in the 20 years of friction stir welding (FSW) research, despite the existence of this phenomenon (to varying severity) in every FSW process. While in most cases this irregularity is inherently impossible to prevent and intuitively undesirable, several works in recent years have revisited this issue and suggested that by amplifying the tool eccentricity, beneficial improvements in the outcome of the weld joint could actually be realized. However, such claims do not provide a detailed explanation as to why this is the case and fail to explain how it seems to contradict previous findings. Such discrepancies in the literature therefore warrant an in-depth analysis of the matter in order to understand the phenomenon better and finally suggest a definitive verdict as to whether the advantages of tool eccentricity reported in recent works outweigh the disadvantages readily associated with the phenomenon. This is particularly vital since FSW has recently attracted much attention in heavy structural applications of thick-plate aluminum alloys with the introduction of three FSW standards, namely ISO 25239 AWS D12-2014 and CSA W59.2 2018, which are expected to act as catalysts for further expansion of FSW applications. Since such applications would require welding of long beams, extrusions, or plates, any advantages and/or disadvantages of tool eccentricity would be inherently embedded in the system and would therefore require serious consideration. To come to a sound verdict, this study attempts to view the issue in a holistic manner. Following the ‘structure, property, process, and performance’ tetrahedral components of materials engineering, this study firstly looks into the microstructural and mechanical evolution of welded joints by employing tools with specified eccentricity. The mechanism behind the observed metallurgical and mechanical transformation are then investigated. Next, the changes in the process parameters are analyzed and subsequently discussed. The study then expands these findings through characterization in dissimilar alloy FSW joints. Finally, the impact of tool eccentricity on the welding process response variables is assessed. From the metallurgical standpoint, the formation of rougher weld bead surface and expansion of periodic bands in the stir zone when eccentric tools were employed suggested improved material flow and mixing. Through observations of grain refinement and higher strain rates compared to typical aligned specimens, it is also suggested that enhanced shearing activity occurs with increased eccentricity. In addition, a shift in preferred texture orientation through energy backscattered diffraction (EBSD) analysis suggests deviation from the typical material flow order due to increased tool eccentricity. Further transmission electron microscopy (TEM) observations suggest that evolution of second phase particles in the periodic bands occur with a more eccentric tool setup, as compared to an aligned setup. Interestingly, the microstructural evolution caused by increased tool eccentricity results in only negligible effects on the global mechanical properties of the joint, since failure primarily occurs in the heat-affected zone (HAZ) of the heat-treatable AA6061 alloy. However, it was found that, when a 0.2 mm kissing bond defect is present, the ‘soft zone’ of the periodic band could deviate the fracture path to force it to propagate through the stir zone, which can be potentially detrimental to the joint integrity. Finally, concerning the FSW process, it was found that tool eccentricity negatively affects the load imposed onto the tool. Tri-axial force measurements and high-speed camera observations suggest that larger force oscillations occur with larger tool eccentricity, which may shorten tool life. However, the range of welding parameters employed in this study show negligible effect of tool eccentricity on the torque values. Peak temperature measurements of the stir zone showed close proximity values to the solidus temperature of the alloy, which suggests the occurrence of a ‘stick-slip’ mechanism that stabilizes the torque values. In conclusion, while the results do suggest significant differences in the metallurgical morphology in the local stir zone regions caused by eccentric tool setup, the impact on the global mechanical properties of the joint is found to be negligible in thick-plate aluminum alloys. More importantly, tool eccentricity negatively affects the load imposed onto the tool, which might adversely reduce tool life and, by extension, the integrity of the FSW machine itself. It is thus suggested that tool eccentricity should be gauged and minimized prior to employing the FSW process in order to prolong tool and machine life while avoiding unintentional metallurgical property variations in the weld joint.