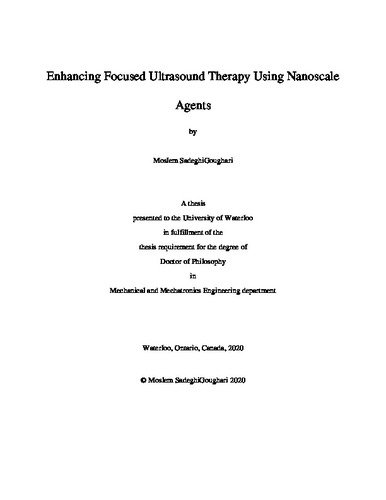 Focused ultrasound therapy, also known as high intensity focused ultrasound (HIFU), is a new energy-based method that uses ultrasonic energy to treat a range of health disorders and tumors. Despite the great potential for cancer treatment, the HIFU therapies for the breast and abdominal regions have not yet been granted FDA approval. One of major challenges of HIFU is the collateral damage due to the use of high ultrasonic energy during the thermal treatment. One promising strategy to enhance the heating mechanism of HIFU, and consequently to reduce its side effects, is to employ nanoparticles (NPs) as ultrasound absorption agents. To improve the therapeutic mechanism of NP-enhanced HIFU, it is essential to better understand the physics of the interaction between ultrasonic waves and NPs, and to clarify the effects of crucial parameters that can affect HIFU’s heating mechanism. This thesis includes experimental and numerical analyses i) to develop an analytical and numerical model that can simulate the physics of NP-enhanced HIFU, ii) to examine the effects of NP features, including the NP size and volume concentration, on the thermal mechanism of HIFU, and iii) to investigate the feasibility of using carbon nanotubes (CNTs) as new ultrasound absorption agents during HIFU to enhance heating at low powers. In an effort to describe the physics of the interaction between ultrasonic waves and NPs, a set of HIFU equations governing the temperature variation during the NP-enhanced HIFU thermal procedure was derived based on the principle of energy conservation for heat transfer. The accuracy of the numerical model was verified by performing a series of HIFU experiments on phantoms embedded with magnetic NPs (MNPs). A quantitative comparison with experimental results demonstrated the potential of the numerical model to accurately predict the heating mechanism of HIFU mediated by NPs. The results showed that the transport processes that occur at the boundaries between NPs and the surrounding medium play a major role in the temperature rise during NP-enhanced HIFU. Based on the results from the numerical simulation and experiments, the effects of MNP features, including the size and volume concentration, on the HIFU heating mechanism were examined, and the performance of NPs was studied when exposed to ultrasonic fields at different ranges of powers and frequencies. It was proved that the increase of MNP size and volume concentration greatly enhanced the HIFU parameters; the effects of MNPs were further improved by increasing the power and frequency of the ultrasonic field. In addition, an experimental analysis was conducted to assess the utility of CNTs as new ultrasound absorption agents during the HIFU thermal therapy using phantoms embedded with CNTs. The results showed the improving effects of CNTs on the HIFU thermal ablation became more pronounced by increasing the absorption rate of acoustic energy and temperature. It was also demonstrated that the effects of CNTs for increasing temperature were improved by amplifying the power and frequency, as well as by increasing the CNT concentration.