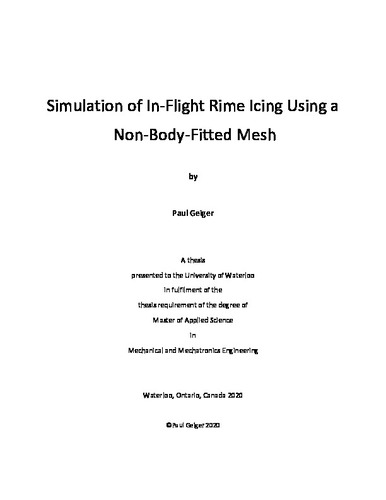 In-flight rime icing occurs when supercooled droplets strike the surface of an aircraft and instantly freeze. This often occurs in the high moisture, cold environments of clouds and is of major concern to aircraft manufacturers and pilots due to safety issues, as the icing degrades the aerodynamic performance of the plane. Rime icing models are important in their own right and as a step towards more complex glaze ice/mixed ice models. Most current commercially available software use boundary-fitted approaches to the air and droplet phases along with a node-displacement method for the boundary. This can cause issues as the node-displacement approach to the boundary can cause tangles in the boundary which are unphysical, and the boundary-fitted methodologies require remeshing after each ice accretion step which can degrade mesh quality and cause crashes. The goal of this thesis is to create a non-boundary-fitted approach towards rime icing simulations. Level set methodologies, which are unsusceptible to tangles, are used to handle the evolution of the boundaries. Static meshes which are Cartesian in the vicinity of the boundary are used, and high Reynolds wall functions are incorporated into the methodology so that the meshes can be made coarser and solutions can be reached faster. This proposed model is implemented via modifications of the OpenFOAM® 5.0 open-source environment. Where possible, results are compared to experimental results and to the commercially available FENSAP-ICE software by ANSYS, Inc. Immersed boundary and cut-cell methodologies are explored for the droplets near the boundary. It was found that the developed cut-cell methodology is about twice as accurate as the immersed boundary method developed and that this is one of the dominant discretization errors in many tests. It was shown that as droplet size goes down, particularly below 10 μm, differences in-between the FENSAP-ICE and the proposed model start increasing, with the total collection efficiency going from 0.2% different in-between the models for droplets of size 35.52 μm up to as much as 300% for 4.96 μm, and it is suggested that modifications to the model and discretization be made before tests for sub-10 μm mean-value droplet diameter (MVD) are run, although these tend to be rarely encountered in nature as most droplets tend to range from 10-50 μm. For simulation using a MVD of 16 μm and a 7-bin Langmuir-D distribution, it was found that the model differed in total collection predictions from FENSAP-ICE by 0.8%, and by 2.9% using just the MVD, as the smallest droplets contribute very little to the net collection. Using a pseudo-steady-state, multistep icing procedure, it was found that over a NACA23012 airfoil at a 2⁰ angle of attack, the total accreted ice for a 1-step ice accretion differed by 0.21% from FENSAP-ICE results, and for a 4-step test, it differed by 0.11% with similar resultant ice shapes when a developed model for the ending time-step which increases the global conservation was used, and by 17% for a 1-step test when it was not. Some additional numerical roughness was noted, and this was dealt with via a developed artificial diffusion model for the evolution velocity for a NACA0012 airfoil at 4⁰ under 2 different conditions. Using this model, the roughness is reduced and for an 8-step test, the total accreted ice differs from FENSAP-ICE results by 0.17% and 2.1% depending on the conditions with similar ice shapes. FENSAP-ICE was not able to handle 16-step tests with either condition, while the proposed model was, showing the improved robustness of the proposed model. Some important next steps were presented, including extensions required for glaze ice and for 3D simulations.