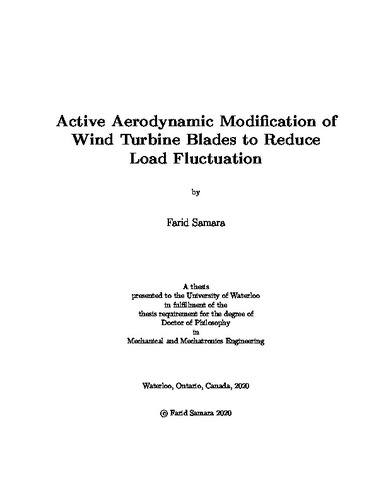 Wind turbines operate predominantly in relatively unsteady flow conditions and are typically misaligned with the incoming wind. Moreover, as wind turbines increase in size, the loading on the blades becomes more problematic and obstructs the development of larger and more efficient wind turbines. In this project, a trailing edge flap (TEF) is used to develop an active control strategy to attenuate load fluctuation on the blades in normal environmental conditions. Wind turbine load fluctuation reduction techniques could increase the power produced by the turbine, reduce the capital and maintenance cost while prolonging the life span of not just the blades but the drivetrain and tower. An experimental 3.5 m diameter wind turbine rig was designed and tested in a large scale wind generation facility operating at different tip speed ratios, blade pitch angles and yaw angles. The instrumentation of the compact blade was capable of measuring rotor torque, flapwise/edgewise blade root bending moment, and normal force coefficient at r/R=0.66 and 0.82. Two custom-built actuation systems were capable of oscillating the pitch and flap independently to create an active control strategy. The blade is of constant pitch and chord of 178 mm while the TEF covers 20% of the chord and 22% of the 1.47 m aerodynamic blade span. First, a 2D experimental campaign showed how the TEF is fully capable of controlling the airfoil aerodynamics statically and during dynamic stall. It is concluded that even though the TEF was not capable of controlling the formation of the leading edge vortex (LEV), it was however capable of reducing its magnitude and more importantly, a reduction in cyclic loading. Second, a comprehensive and a detailed set of results showed how the rotor torque, flapwise/edgewise blade root bending moment, and normal force coefficient at multiple r/R locations change under different yaw angles, pitch angles, tip speed ratio and TEF angles. When possible the results were compared to numerical models such as the NREL OpenFast code to increase confidence in the results and provide essential conclusions to improve the models. It was found that in non-yawed conditions, OpenFast predictions were accurate but discrepancies start to emerge when the turbine is yawed and operating in dynamic stall conditions. Finally, the pitch and TEF were continuously actuated in separate tests to determine the effectiveness of each system at reducing load fluctuation on a yawed wind turbine. The reduction in load fluctuation due to the TEF and the pitch systems were found to be between 45%-65% and 65%-80% respectively. The data presented throughout this thesis provides a methodical and comprehensive argument to support the use of TEF on a utility-scale turbines to reduce load fluctuation and fatigue levels at the blade root. It also provides insight on the effects of dynamic stall, stall delay and 3D flow induced by the blade rotation on an operating wind turbine.