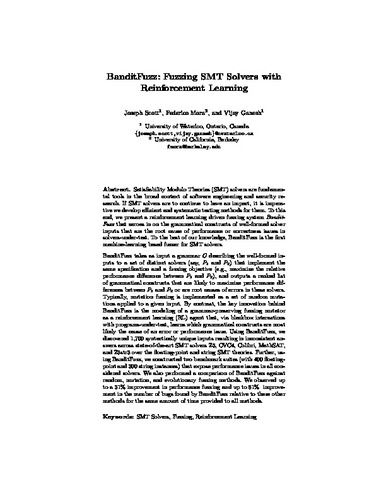 Satisfiability Modulo Theories (SMT) solvers are fundamental tools in the broad context of software engineering and security research. If SMT solvers are to continue to have an impact, it is imperative we develop efficient and systematic testing methods for them. To this end, we present a reinforcement learning driven fuzzing system BanditFuzz that zeroes in on the grammatical constructs of well-formed solver inputs that are the root cause of performance or correctness issues in solvers-under-test. To the best of our knowledge, BanditFuzz is the first machine-learning based fuzzer for SMT solvers. BanditFuzz takes as input a grammar G describing the well-formed inputs to a set of distinct solvers (say, P_1 and P_2) that implement the same specification and a fuzzing objective (e.g., maximize the relative performance difference between P_1 and P_2), and outputs a ranked list of grammatical constructs that are likely to maximize performance differences between P_1 and P_2 or are root causes of errors in these solvers. Typically, mutation fuzzing is implemented as a set of random mutations applied to a given input. By contrast, the key innovation behind BanditFuzz is the modeling of a grammar-preserving fuzzing mutator as a reinforcement learning (RL) agent that, via blackbox interactions with programs-under-test, learns which grammatical constructs are most likely the cause of an error or performance issue. Using BanditFuzz, we discovered 1700 syntactically unique inputs resulting in inconsistent answers across state-of-the-art SMT solvers Z3, CVC4, Colibri, MathSAT, and Z3str3 over the floating-point and string SMT theories. Further, using BanditFuzz, we constructed two benchmark suites (with 400 floating-point and 110 string instances) that expose performance issues in all considered solvers. We also performed a comparison of BanditFuzz against random, mutation, and evolutionary fuzzing methods. We observed up to a 31% improvement in performance fuzzing and up to 81% improvement in the number of bugs found by BanditFuzz relative to these other methods for the same amount of time provided to all methods.