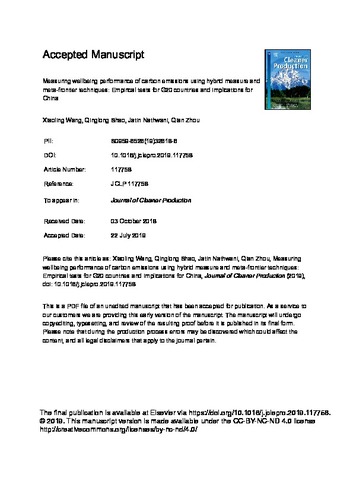 A quantitative measure of performance that integrates national-level carbon emission profiles with key parameters of social and economic wellbeing can provide an effective management tool for policy interventions. This paper constructs non-parametric evaluation and decomposition models using hybrid measure and meta-frontier techniques. The proposed models are employed to estimate the wellbeing performance of carbon emissions (WPCE) and identify the sources of WPCE inefficiency. Empirical analyses based on the Group 20 (G20) countries for the 2000–2015 period shows the worst performance is in the BRICS country group (i.e. Brazil, Russia, India, China, and South Africa) – known for rapid growth – whereas the developed and the developing economies of the G20 group show positive trajectories of performance. As for China, its performance measure of WPCE was the lowest among the G20 indicating significant potential for further improvement. The analysis also highlights the role of managerial failure as the primary driver of inefficiency, more important than technological inefficiency in explaining efficiency loss within the G20 countries. This critical finding – the relevance and importance of managerial capability – suggests the need for a high level of attention to governance and managerial capacity to ensure continued improvements in performance on carbon emissions and human wellbeing. A lesson to be drawn from this study is that China's policies to promote a low carbon economy can benefit from increased priority given to low-carbon technological innovation for the energy system transition and enhancement of environmental governance and managerial capacity to achieve a long-term sustainability.