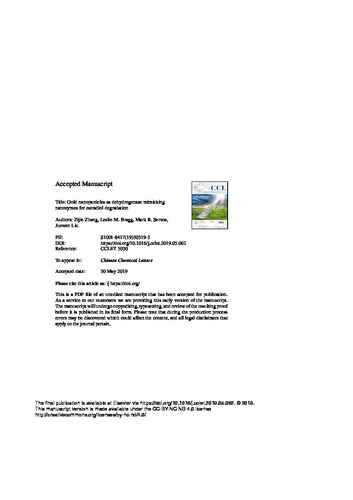 Nanozyme catalysis has been mainly focused on a few chromogenic and fluorogenic substrates, while environmentally and biologically important compounds need to be tested to advance the field. In this work, we studied oxidation of estradiol (E2) in the presence of various nanomaterials including gold nanoparticles (AuNPs), nanoceria (CeO2), Fe3O4, Fe2O3, MnO2 and Mn2O3, and found that AuNPs had a dehydrogenase-mimicking activity to convert E2 to estrone (E1). This conversion was monitored using HPLC. The reaction was faster at higher pH and reached saturation at pH 8. Smaller AuNPs had a higher catalytic efficiency and 5 nm AuNPs were 4.8-fold faster than 13 nm at the same total surface area. Finally, we tried 17α-ethinylestradiol (EE2) as a substrate and found that 5 nm AuNPs can catalyze EE2 oxidation in the presence of H2O2. This work indicated that some nanomaterials can affect environmentally important hormones via oxidation reactions, and this study has expanded the scope of substrate of nanozymes.