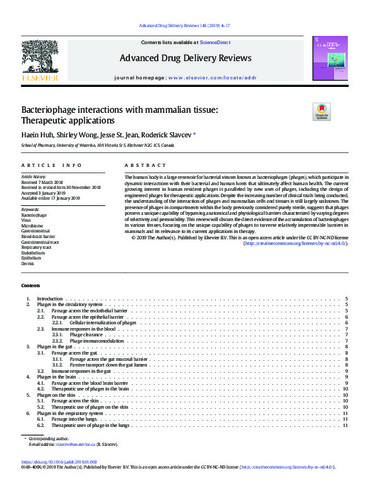 The human body is a large reservoir for bacterial viruses known as bacteriophages (phages), which participate in dynamic interactions with their bacterial and human hosts that ultimately affect human health. The current growing interest in human resident phages is paralleled by new uses of phages, including the design of engineered phages for therapeutic applications. Despite the increasing number of clinical trials being conducted, the understanding of the interaction of phages and mammalian cells and tissues is still largely unknown. The presence of phages in compartments within the body previously considered purely sterile, suggests that phages possess a unique capability of bypassing anatomical and physiological barriers characterized by varying degrees of selectivity and permeability. This review will discuss the direct evidence of the accumulation of bacteriophages in various tissues, focusing on the unique capability of phages to traverse relatively impermeable barriers in mammals and its relevance to its current applications in therapy.