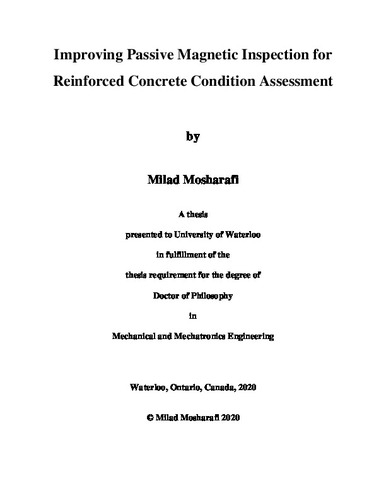 Life quality, industrial productivity, and community safety can be assured by the reliability and the safety of infrastructure such as highways, bridges, and energy-supply systems. Reinforced concrete is the most-commonly used massive construction material in urban, road and industrial infrastructure because of its mechanical properties, durability, and mouldability. Concrete has acceptable compressive strength but relatively low tensile strength, so steel reinforcement rods (rebar) are usually added to concrete to enhance its tensile strength. However, steel rebar is subject to the serious and costly problem of corrosion, which eventually can significantly degrade the mechanical properties of concrete. Quantifying the corrosion condition of reinforcing steel can help manage associated risks arising from the unexpected function failure of reinforced concrete structures. In efforts to avoid such failures, engineers rely on quantitative time-history condition monitoring of reinforcing steel to help make decisions on rehabilitation, decommissioning, or replacement of concrete infrastructure. The self-magnetic behaviour of ferromagnetic materials can be used for quantitative condition assessment. Inspection of reinforced concrete structures by a method based on this concept is under development. Improving the data recording, mathematical simulation and interpretation so as to obtain more-reliable outcomes from this novel NDT technology (Passive Magnetic Inspection (PMI)) is the main aim of this research project. This thesis, consisting of eight chapters, investigates various experiments and simulations, and delineates future work: Chapter 1 includes the introduction, theoretical background, and research objectives; Chapter 2 consists of numerical simulations and experimental results on the passive magnetic behavior of a rebar with pitting; Chapter 3 represents the simulations and experimental results of the investigations on rebars with local longitudinal defects; Chapter 4 investigates the self-magnetic behaviour of rebars with different sizes of crack; Chapter 5 covers numerical simulations and experimental results of passive magnetic behavior of an intact rebar and a rebar with general corrosion; Chapter 6 compares the magnetic flux density values generated from rebars with different degrees of general corrosion; Chapter 7 describes a successful fieldwork project; Chapter 8 outlines a general conclusion and future works that can help the further improvement of the inspection technology. To explain the content of the thesis in more detail, through the analysis of magnetic data, Chapters 2, 3, and 4 cover methods for identifying the local defects in steel reinforcements, and Chapters 5 and 6 focus on realizing the general corrosion of steel rebars. Applicable findings generated from Chapter 2 to Chapter 6 are used in detecting and categorizing the local defects and general corrosion in steel rebars. For instance, it is shown that a certain percentile threshold can be applied on magnetic data to accurately detect longitudinal defects. It is also demonstrated that medium and large cracks are detected by magnetic values’ absolute gradients of greater than 0.87 (µT/mm) and 0.95 (µT/mm), respectively. In addition, it is shown that the average of standard deviations calculated for a magnetic data set decreases when the degree of general corrosion increases. The findings in the first six chapters are implemented to establish the data gathering, data analysis, and interpretation approaches used in the field work described in Chapter 7. In the field work, the condition of culvert C072’s reinforced concrete (RC) bridge structure (located in the north of Markham, Ontario, Canada) is inspected. The inspection, supervised by the Corporation of the City of Markham, uses PMI technology. The inspection outcomes demonstrate that the sections close to the south and north ends of the bridge display the most-severe reinforcement anomalies: roughly, maximums of 20% and 14% of the reinforcement’s cross-sectional area loss are detected close to the bridging structure’s south and north ends, respectively. Additionally, an area in the middle of the bridge is found to have a noticeable anomaly in the reinforcement. The results generated from the magnetic data, collected using a PMI scanner, are in good agreement with visual-investigation results and the culvert’s historical information, such as the concrete’s chloride content and compressive strength values, as well as information from a half-cell potential survey. Culvert C072’s condition is considered moderately deteriorated and corrective actions are recommended.