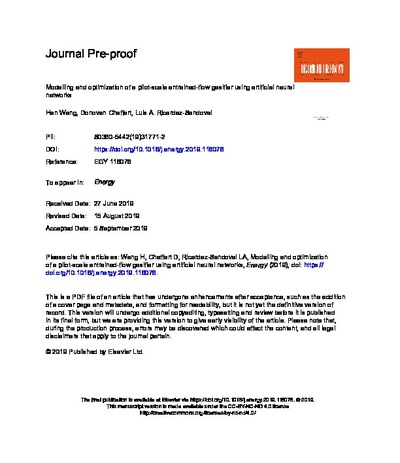 This paper explores the construction and validation of an artificial neural network (ANN) in order to accurately and efficiently predict the performance of a pilot-scale gasifier unit. This ANN model consists of multiple sub-networks that individually predict each of the desired gasifier outputs as a function of key system parameters. The ANN was trained using data generated for a large set of randomly-generated input conditions from a pilot-scale gasifier reduced order model (ROM) developed previously. The fully-trained ANN was validated by comparing its performance to the aforementioned ROM model. The validated ANN model was subsequently implemented into two optimization studies in order to determine the operating conditions necessary to maximize the carbon conversion under different limitations for the peak temperature of the gasifier and to determine the ideal input conditions of maximizing both the carbon conversion and production of hydrogen gas which are two conflicting objectives. This case study further showcases the benefit of the ANN, which was able to obtain accurate predictions for the gasifier results similar to the results generated by the ROM model at a much lower computational cost.