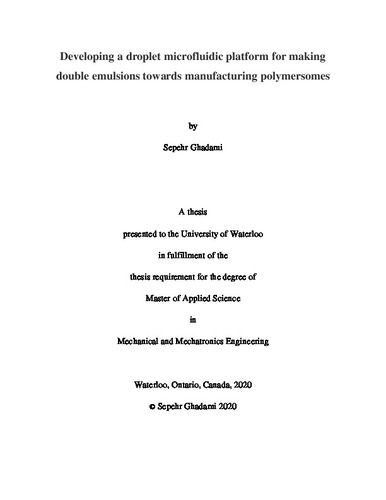 In recent years, there has been growing interest in the use of double emulsions in various industries such as pharmaceutical, foods, and cosmetics. Polymersomes are one of the promising applications of double emulsions that are being increasingly used in drug delivery to carry and release a specific dose of the drug. The efficacy of using polymersomes for controlled release of drugs is significantly dependent on the monodispersity and size generated double emulsions. Over the past few years, microfluidics technology has been used to produce double emulsions with high throughput and precision. Single-step, two-step and tandem methods are among the most common techniques that are being used for generation of water/oil/water (w/o/w) or oil/water/oil (o/w/o) emulsions. However, the existing methods have not yet addressed the challenges in the field. In this work, we present a microfluidic design to produce double emulsions with high monodispersity in addition to high control over the thickness of the middle phase. The presented design also solves the challenge of surface modification of microchannels which usually adds complexity to the existing methods. Moreover, in this project, a thorough guideline is provided to design an optimized platform for producing double emulsions with different sizes. Finally, we successfully show how such double emulsions can be used for generation of polymersomes by extraction of the organic component.