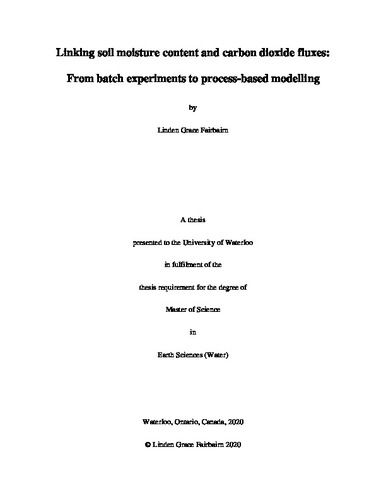 The emissions of carbon dioxide (CO2) from soil to the atmosphere represent a major flux within the global carbon cycle. Soil CO2 fluxes depend on environmental factors including soil moisture and oxygen, and on intrinsic physical and chemical properties of the soil itself. The responses of soil CO2 fluxes to changes in environmental conditions remain unclear but are critical for predictive modelling of carbon fluxes with climate change. The numerous processes involved in soil CO2 production and some of their driving factors are reviewed and discussed in Chapter 1 of this thesis. In Chapter 2, I examined the effects of both soil moisture and oxygen on soil CO2 fluxes through experimentation and modelling. Soil moisture and oxygen are closely linked: given a constant pore volume, gas-filled pore space decreases as the proportion of water-filled pore space increases, both of which influence soil aerobic and anaerobic microbial processes. To decouple the effects of soil moisture and oxygen, I conducted a factorial batch experiment by incubating an agricultural soil collected from the field and adjusted to different moisture contents (30%-100% water-filled pore space; WFPS) and under oxic versus anoxic headspaces. Gas fluxes (CO2 and methane) and pore water chemistry parameters were measured at the end of the 21-day incubation. The results demonstrated that, as expected, CO2 fluxes became moisture-limited at low soil moisture and oxygen-limited at high soil moisture; hence, fluxes were maximal at moderate moisture content (65% WFPS). Non-zero and, at times, substantial fluxes at 100% saturation and under anoxic incubation demonstrated that anaerobic sources contributed to overall CO2 fluxes in addition to aerobic respiration. CO2 fluxes under anoxic headspaces were affected by soil moisture independently of oxygen availability, with maximum fluxes occurring at 100% saturation. At high moisture contents (80% and 100% WFPS), CO2 fluxes in anoxic incubations were 75% to >100% of those in oxic incubations. Methane fluxes, production of low molecular weight organic acids and depletion of other electron acceptors indicated that fermentation and methanogenesis were likely the main pathways for CO2 production occurring at the end of the anoxic incubation. These results demonstrated that anaerobic production of CO2 (via fermentation, methanogenesis and/or anaerobic respiration) can be an important source that has been ignored in existing models which typically only consider aerobic respiration. A simple formulation for incorporating anaerobic sources in existing models was developed. These results highlight that CO2 is produced by a collection of soil processes and therefore model development needs to move beyond the simplified “soil respiration” representation and incorporate a process-based understanding of greenhouse gas-emitting processes in soil. In Chapter 3, I reviewed the current state of knowledge regarding the effect of soil texture on soil CO2 fluxes. While many past studies have investigated the protective effect of clay on soil organic matter, I focussed this discussion on the potential interaction between soil texture and soil moisture in controlling soil CO2 fluxes. The review identified that, while some studies have developed a conceptual framework for making predictions about this possible interaction, very few studies have tested these predictions experimentally. As a first step in investigating soil texture and soil moisture in a factorial experiment, I conducted another batch experiment where I prepared three artificial soils of varying textures (ranging from approximately 7%-20% clay content) and incubated soil samples at different moisture contents (ranging from approximately 7%-100% WFPS). The measured CO2 fluxes and their relationship with soil moisture were affected by soil texture, although the way in which soil moisture was expressed (gravimetric vs. % WFPS) affected the functional dependence of the CO2 fluxes on soil texture. More direct experimental data and improvements to the experimental methods will be required to advance our process-based understanding of how soil texture and soil moisture affect CO2 fluxes. This process-based understanding is prerequisite to the development and validation of models that accurately represent these controlling factors.