Hydrologic function of a moderate-rich fen watershed in the Athabasca Oil Sands Region of the Western Boreal Plain, northern Alberta 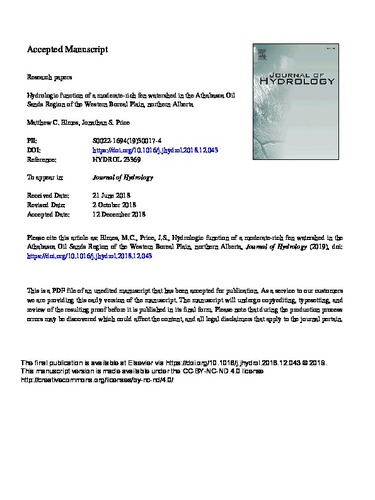 Peatlands are a dominant land feature in the Athabasca Oil Sands Region (AOSR) of the Western Boreal Plain (WBP), comprising >50% of the total land area, many of which are moderate-rich fens. The carbon stocks of moderate-rich fens in the WBP are susceptible to degradation through anthropogenic- and climate-related factors, yet, few studies have aimed to understand their hydrologic function. This study, located in a meltwater channel belt characterized by relatively thin outwash sand and gravel (∼6 m) underlying the peat, provides the first hydrological assessment of a moderate-rich fen in the AOSR. The lithology, hydrological function and groundwater geochemistry all point to the dominance of a local flow system supplying groundwater to the fen areas, evidenced by a thick (∼16 m) and shallow (∼7 m below ground surface) aquitard underlying the outwash, restricting hydrological connectivity between the fen and underlying regional aquifers. Vertical hydraulic gradients between the peat and underlying outwash aquifer, and horizontal hydraulic gradients between the fen and upland varied in response to both short-term and seasonal precipitation trends. Groundwater discharge to the fen was enhanced during wet periods characterized by high rainfall. Conversely, flow reversals (groundwater recharge; fen to underlying aquifer and upland), and subsequently, enhanced fen water table drawdown persisted during extended dry periods. This local groundwater flow-system influences recharge/discharge patterns at Poplar Fen, with hydraulic head in the underlying outwash aquifer highly susceptible to fluctuations in the presence and absence of precipitation-driven recharge from adjacent uplands. Moderate-rich fens similar to that studied here will likely become more susceptible to drying in the future due to a changing climate, leading to enhanced water table drawdown, peat oxidation and subsequent decomposition, vulnerability to wildfire, and seral succession to a more ombrogenous peatland system.