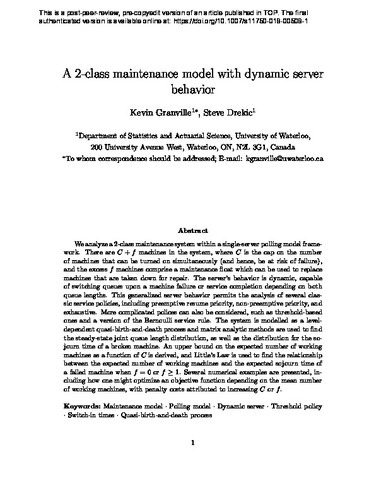 We analyze a 2-class maintenance system within a single-server polling model framework. There are C+f machines in the system, where C is the cap on the number of machines that can be turned on simultaneously (and hence, be at risk of failure), and the excess f machines comprise a maintenance float which can be used to replace machines that are taken down for repair. The server’s behavior is dynamic, capable of switching queues upon a machine failure or service completion depending on both queue lengths. This generalized server behavior permits the analysis of several classic service policies, including preemptive resume priority, non-preemptive priority, and exhaustive. More complicated polices can also be considered, such as threshold-based ones and a version of the Bernoulli service rule. The system is modeled as a level-dependent quasi-birth-and-death process and matrix analytic methods are used to find the steady-state joint queue length distribution, as well as the distribution for the sojourn time of a broken machine. An upper bound on the expected number of working machines as a function of C is derived, and Little’s Law is used to find the relationship between the expected number of working machines and the expected sojourn time of a failed machine when f=0 or f≥1. Several numerical examples are presented, including how one might optimize an objective function depending on the mean number of working machines, with penalty costs attributed to increasing C or f.