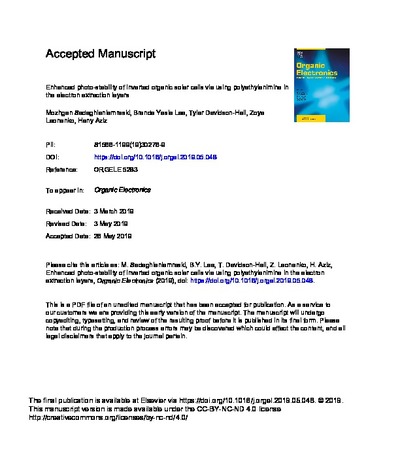 The influence of using Polyethylenimine (PEI) in the electron extraction layers (EELs) on the photo-stability of inverted organic solar cells (OSCs) is investigated. Results show that introducing PEI in the commonly used ZnO EELs, either mixed in the same layer with the ZnO (ZnO:PEI mixture) or in a separate layer in the form of a bilayer EEL configuration (ZnO/PEI), reduces the susceptibility of OSCs to photo-degradation with the mixture giving more significant stability enhancements. In comparison to the widely used ZnO EEL, the use of ZnO:PEI mixture is found to lead to ∼ 5× higher PCE stability under continuous UV irradiation, the latter being the main factor behind the limited stability of the cells under sunlight, primarily due to a more stable and FF. Tests on electron only devices show that the higher photo-stability is mainly due to the role of the ZnO:PEI mixture in minimizing light-induced deterioration in electron collection efficiency at OSCs electron collection contacts under sunlight. Kelvin probe force microscopy (KPFM) measurements show that the use of ZnO:PEI helps maintain a more stable surface potential at the electron collection contact, hence the more stable and FF. X-ray photoelectron spectroscopy (XPS) measurements reveal that the stability enhancement is likely associated with chemical interactions between PEI and ITO at the ITO/ZnO:PEI interface that produce a more electronically and energetically stable contact that is less susceptible to changes in surface potential or work function by UV illumination. Using PEI in the form of a neat layer next to the ITO in a bilayer EEL (PEI/ZnO) is found to provide a similar significant enhancement in photo-stability, further ascertaining the above conclusions. The findings not only reveal the potential of utilizing PEI in the EEL, but also shed light on some of the root causes of the limited photo-stability of OSCs and approaches to mitigate their effect.