Age-Related Changes in Vibro-Tactile EEG Response and Its Implications in BCI Applications: A Comparison Between Older and Younger Populations 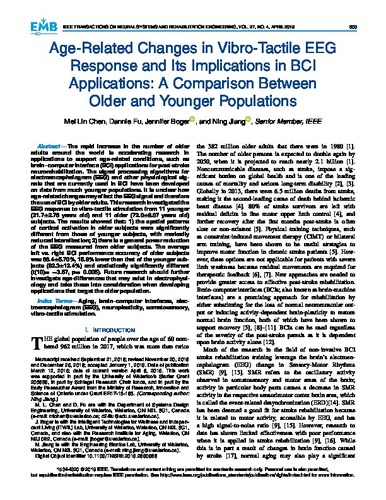 The rapid increase in the number of older adults around the world is accelerating research in applications to support age-related conditions, such as brain-computer interface (BCI) applications for post-stroke neurorehabilitation. The signal processing algorithms for electroencephalogram (EEG) and other physiological signals that are currently used in BCI have been developed on data from much younger populations. It is unclear how age-related changes may affect the EEG signal and therefore the use of BCI by older adults. This research investigated the EEG response to vibro-tactile stimulation from 11 younger (21.7 ± 2.76 years old) and 11 older (72.0 ± 8.07 years old) subjects. The results showed that: 1) the spatial patterns of cortical activation in older subjects were significantly different from those of younger subjects, with markedly reduced lateralization; 2) there is a general power reduction of the EEG measured from older subjects. The average left vs. right BCI performance accuracy of older subjects was 66.4 ± 5.70%, 15.9% lower than that of the younger subjects (82.3 ± 12.4%) and statistically significantly different (t(10) = -3.57, p = 0.005). Future research should further investigate age-differences that may exist in electrophysiology and take these into consideration when developing applications that target the older population.