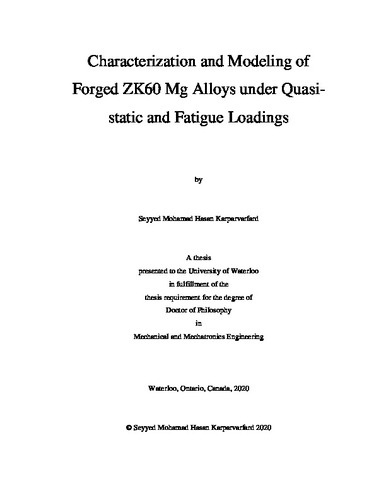 In response to impending changes to the environmental regulations on the vehicles’ gas consumption rate, the transportation sector is motivated toward the widespread adoption of lightweight materials in the manufacturing of its products. Magnesium (Mg) alloys, being the lightest commercial metals available in the industry, can play an integral role in this scope with offering huge mass saving comparing to aluminum and steel. With the development of multi-material vehicle architecture concept in the automotive industry philosophy, ultra-light materials such as Mg alloys should be exploited in the component in which they perform the best. For vehicle parts which are driven by fatigue, e.g., suspension control arm, wrought Mg is a suitable candidate as a substitute for the current structural metals, due to its excellent fatigue performance in addition to opening mass saving windows. Of the commercially available Mg alloys, ZK- series, and in particular, ZK60 Mg alloys, have shown superb mechanical properties and formability. Moreover, amongst several prevalent industrial manufacturing techniques, forging is of particular interest because it has shown its promise to produce components with complex geometry and high strength. However, the mechanical behavior of forged ZK60 has been largely unknown so far. The current research work has aimed to fill this gap by characterizing the mechanical behavior of forged ZK60. The focus has been to establish a link between the material, structure and performance. The discovery-level knowledge, established through this project, develops a better understanding of the fatigue performance of this alloy and provides a wealth of mechanical performance data on this material in order for industry to make better use of it in real-world applications. Initially, the effects of open-die forging on the mechanical behavior of cast ZK60 was studied. A partially recrystallized microstructure with sharp basal texture was developed in the material. Also, the porosity volume was dramatically reduced after the forging. As a result, the tensile yield strength and elongation were increased by 21% and 72%, respectively. Under cyclic loadings, the forged material exhibited a better response in both the low cycle fatigue (LCF) and high cycle fatigue (HCF) regimes in the light of its higher ductility and strength, and lower content of porosities and intermetallic particles, which can play as crack nucleation sites. The fracture surfaces of the samples tested at various strain amplitudes were analyzed using the scanning electron microscope (SEM), and different crack initiation mechanisms were identified. At low strain amplitudes, corresponding to the HCF regime, persistent slip bands (PSB) and second-phase intermetallic particles were defined as the major causes of crack initiation, whilst at high strain amplitudes, ascribed to the LCF lives, the interactions between twin-twin bands besides twin-dislocation were recognized as the key reasons for cracking. Next, the quasi-static and strain-controlled fatigue characteristics of ZK60 extrusion have been investigated along different directions, namely, the extrusion direction (ED), the radial direction (RD), and 45° with respect to the extrusion direction (45°), in the scope of process-structure-property-performance relationships. In contrast to the asymmetric quasi-static behavior of extrusion direction, radial and 45° directions manifested symmetric responses. Also, ED samples showed higher strength compared to the other two directions. The strain-controlled fatigue performance of ZK60 extrusion was insensitive to the material direction in the LCF regime. However, in the HCF regime, ED displayed fatigue responses superior to the RD and 45°. The texture measurement indicated a sharp basal texture along ED. Also, microstructural analyses revealed binary microstructure, explaining the ED’s asymmetric behavior and higher strength comparing to the other directions. Higher tensile mean stress and less dissipated plastic energy per cycle for the ED samples, acting as two competing factors, were the principal reasons for ED’s identical fatigue response to that of RD and 45 in the LCF regime. The fracture surface in the ED direction was dominated by twin lamellae and profuse twinned grains, whereas that in RD was dominated by slip bands. Lastly, Smith-Watson-Topper and Jahed-Varvani models were employed to predict the fatigue lives along all directions using a single set of material parameters. The energy-based model yielded acceptable predictions for ZK60 extrusion with anisotropic behavior. Finally, the multiaxial fatigue characteristics of as-extruded and close-die “I-beam” extruded-forged ZK60 were investigated. Quasi-static tension and shear tests in addition to uniaxial, pure shear, and multiaxial cyclic tests under variety of loading paths as well as texture measurements and microstructural analysis were delivered to characterize the material’s behavior and understand the effects of forging on the performance of the alloy. It was discovered that the imparted thermo-mechanical process modified the initial sharp basal texture in the flanges of the I-beam. Secondly, following forging, the microstructures in the two flanges of the I-beams were similar. Furthermore, following the quasi-static tests, it was revealed that the axial behavior of the forging was superior to that of the starting extruded material, whereas the shear responses were comparable. Multiaxial fatigue tests demonstrated that non-proportionality does not change the fatigue life tremendously; however, it does affect the shear response remarkably. It was concluded that at low shear strain amplitudes that the shear strain is accommodated by slipping, the multiaxial behavior is somewhat dominated by the axial component. The microstructure of both undeformed and deformed samples after 20% shear strain under quasi-static loading was studied using the EBSD technique. The deformed sample showed considerable amount of {101 ̅2} tensile twins in the microstructure; hence, the developed texture plays an integral role in the material’s shear behavior under large strains where appreciable extension twin occurs. Finally, an energy-based fatigue model was employed that effectively explains the different damage contributions by the axial and torsional loadings at different strain amplitudes, and accurately predicts the proportional and non-proportional multiaxial fatigue lives for both as-extruded and forged alloys.