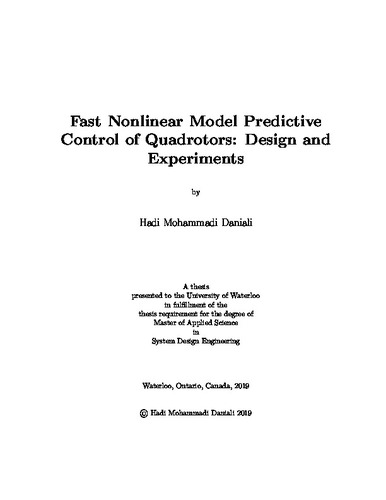 Quadrotor (or quadcopter) is a type of Unmanned Aerial Vehicles (UAVs). Due to the quadrotors simple and inexpensive design, they have become popular platforms. This thesis proposes a computationally fast scheme for implementing Nonlinear Model Predictive Control (NMPC) as a high-level controller to solve the path following problem for unmanned quadrotors. After discussing the background and reviewing the literature, it is noted that this problem referred widely in the literature as a necessary step toward the autonomous ﬂight of quadrotor UAVs. The previous studies usually used simpliﬁed models which are computationally uncomplicated and straightforward in terms of control developments and stability investigations. Moreover, some articles are presented showing the importance of accurate state observation on the performance of feedback-based control approaches. The NMPC-based controller is designed using a more realistic highly nonlinear control-oriented model which requires heavy computations for practical real-time implementations. To deal with this issue, the Newton generalized minimal residual (Newton/GMRES) method is applied to solve the NMPC’s real-time optimizations rapidly during the control process. This technique uses the Hamiltonian method to derive a set of equations with multiple variables. To solve these in a real-time application, the Newton/GMRES method applies forward-diﬀerence generalized minimal residual (fdgmres) algorithm. The simulation and experimental result using a commercial drone, called AR.Drone 2.0, in our laboratory instrumented by a Vicon Vantage motion capture system, demonstrate that our feedback-based control method’s performance highly depends on the reliability of the state vector feedback signals. As a result, a Kalman ﬁlter and Luenberger observer algorithms are used for estimating unknown states. The NMPC-based controller operation is simulated, and the result reveals the similar eﬃciency of observers. Moreover, the NMPC control approach is compared with a proportional controller which shows great improvements in the response of the quadrotor. The experiment showed that our control method is suﬃciently fast for practical implementations, and it can solve the trajectory tracking problem properly even for complex paths. This thesis is concluded by stating a summary of contributions and some potential future works.