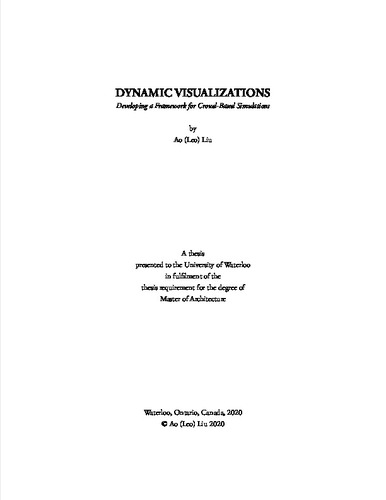 Since its conception in the 1960s, digital computation has experienced both exponential growth in power and reduction in cost. This has allowed the production of relatively cheap electronics, which are now integrated ubiquitously in daily life. With so much computational data and an ever-increasing accessibility to intelligent objects, the potential for integrating such technologies within architectural systems becomes increasingly viable. Today, dynamic architecture is already emerging across the world; it is inevitable that one day computation will be fully integrated within the infrastructures of our cities. However, as these new forms of dynamic architecture becomes increasingly commonplace, the standard static medium of architectural visualization is no longer satisfactory for representing and visualizing these dynamic spaces, let alone the human interactions within them. Occupancy within a space is already inherently dynamic and becomes even more so with the introduction of these new forms of architecture. This in turn challenges our conventional means of visualizing spaces both in design and communication. To fully represent dynamic architecture, the visualization must be dynamic as well. As such, current single image rendering methods within most existing architectural design pipelines becomes inadequate in portraying both the architectural dynamics of the space, as well as the interaction and influences these dynamics will have with the occupants. This thesis aims to mitigate these shortcomings in architectural visualization by investigating the creation of a crowd simulation tool to facilitate a foundation for a visualization framework that can be continuously built upon based on project needs, which answers the question of how one can utilize current technologies to not only better represent responsive architecture but also to optimize existing visualization methodologies. By using an interdisciplinary approach that brings together architecture, computer science, and game design, it becomes possible to establish a more powerful, flexible, and efficient workflow in creating architectural visualizations. Part One will establish a foundation to this thesis by looking at the state of the current world, its buildings in the sense of dynamic, and the current state of visualization technologies that are being utilized both within architectural design as well as outside of it. Part Two will investigate complex systems and simulation models, as well as investigating ways of integrating them with human behaviors to establish a methodology for creating a working crowd simulation system. Part Three will take the methodology developed within Part Two and integrate it within modern game engines, with the intent of creating an architectural visualization pipeline that can utilize the game engine for both crowd analytics as well as visualization. Part Four will look at some of the various spatial typologies that can be visualized with this tool. Finally, Part Five will speculate on various future directions to improve this tool beyond the current scope of this thesis.