Numerical considerations for the simulation of proppant transport through fractures 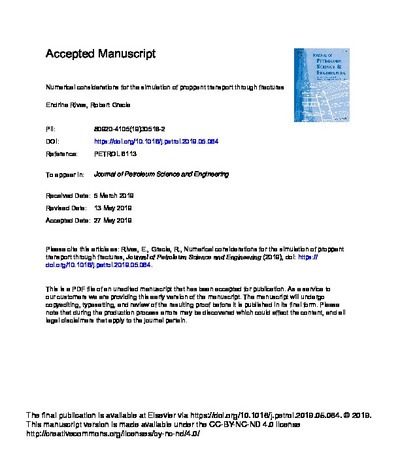 Injection of a proppant slurry (fluid mixed with granular material) into a reservoir to keep fractures open is a common procedure in hydraulic fracturing treatments. This article presents the numerical methodology for simulation of proppant transport through a hydraulic fracture using the Finite Volume Method. Proppant models commonly used in the hydraulic fracture literature solve the linearized advection equation; this work presents solution methods for the nonlinear form of the proppant flux equation. The complexities of solving the nonlinear hyperbolic advection equation that governs proppant transport are tackled, particularly handling shock waves that are generated due to the nonlinear flux function and the spatially-varying width and pressure gradient along the fracture. A critical time step is derived for the proppant transport problem solved using an explicit solution strategy. A predictor-corrector algorithm is developed to constrain the proppant from exceeding the physically admissible range. The model is able to capture the mechanism of proppant bridging which occurs in sections of narrow fracture width, tip screen-out which occurs where fracture becomes saturated with proppant, and flushing of proppant into new fracture segments. The results are verified by comparing with characteristic solutions, and the model is used to simulate proppant transport through a KGD fracture.