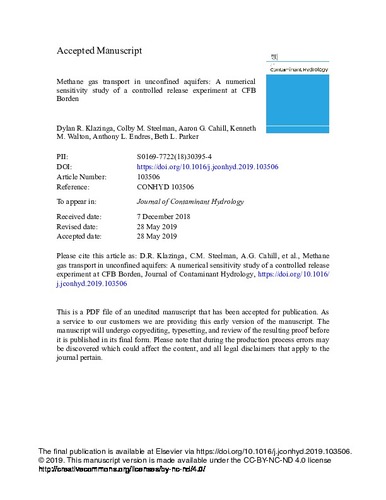 Subsurface leakage of natural gas from petroleum wells can impact freshwater aquifers. Accurate prediction of gas migration in the subsurface will depend on knowledge of permeability, porosity, and flow system conditions. A series of two-dimensional numerical multi-phase flow simulations (CFbio) were conducted to investigate the role of multi-phase parameters (relative permeability and air entry pressure), flow system conditions (intrinsic permeability, anisotropy, and groundwater velocity), and geometric properties (layer thickness and layer lateral continuity) on the flow of gas-phase methane emanating from two variable-rate point sources in an unconfined sandy aquifer. Numerical simulations showed that for a homogeneous, weakly anisotropic aquifer, gas migrates almost exclusively vertically due to buoyancy, before venting to the vadose zone and atmosphere. As vertical migration became restricted through increased anisotropy, inclusion of lower-permeable layers, or increased horizontal groundwater velocity, an increase in the lateral component of gas migration was observed. This led to the formation of a broader lateral migration of the gas-phase plume and establishment of variably distributed vertical preferential flow paths, ultimately resulting in increased gas retention in the aquifer with relatively less methane reaching the vadose zone or atmosphere. The inclusion of a thin layer with moderately lower permeability (1–2 orders of magnitude) and increased air entry pressure was used to depict a fine-grained sand lens within a uniform aquifer. This subtle feature led to the formation of thin gas pools extending up- and down-gradient beneath the lens, allowing methane to travel much farther and faster than by groundwater advection alone, which is consistent with field observations during the experiment. In all scenarios investigated gas-phase methane was shown to migrate predominantly vertically due to buoyancy, until the aquitard permeability was <30% of the aquifer permeability. Our modelling demonstrates that even subtle permeability contrasts, together with capillary pressure changes demarcating grain-scale bedding, will lead to extensive lateral free-phase gas migration, and development of a more extensive and complex zone of impacted aquifer than presupposed.