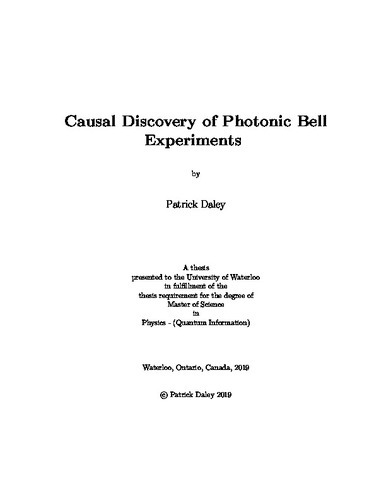 A causal understanding of a physical theory is vital. They provide profound insights into the implications of the theory and contain the information required to manipulate, not only predict, our surroundings. Unfortunately, one of the most broadly used and successful theories, quantum theory, continues to evade a satisfactory causal description. The progress is hindered by the difficulty of faithfully testing causal explanations in an experimental setting. This thesis presents a novel causal discovery algorithm which allows a direct comparison of a wide variety of causal explanations for experimental data. They include causal influences both classical and quantum mechanical in nature. First we provide relevant background information, predominately on quantum mechanics, quantum optics and statistical inference. Next, we review the framework of classical causality and the connection between a causal assumption and statistical model. We then present a novel causal discovery algorithm for noisy experimental data. Finally, we perform two Bell experiments and apply the newly developed algorithm on the resulting data. The causal discovery algorithm operates on observational data without any interven- tions required. It utilizes the concept of predictive accuracy to assign a score to each causal explanation. This allows the simultaneous consideration of classical and quantum causal theories. In addition, this approach allows the identification of overly complex explanations as these perform poorly with respect to this criterion. Both experiments are implemented using quantum optics. The first Bell experiment has a near maximally entangled shared resource state while the second has a separable resource state. The results indicate that a quantum local causal explanation bests describes the first experiment, whereas a classical local causal explanation is preferred for the second. A super-luminal or super-deterministic theory are sub-optimal for both.