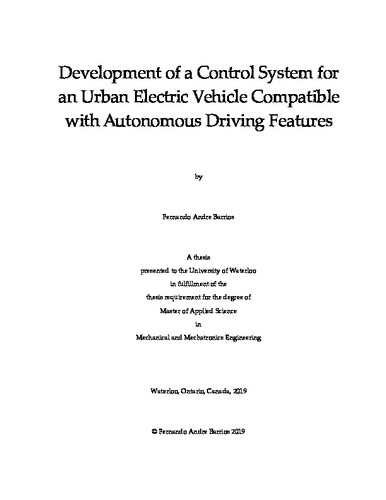 As cities continue to grow, the roads only become more congested, leading drivers to spend more time commuting, while vehicle accidents continue to rise. The Mechatronics Vehicle Systems Laboratory has developed its own urban electric vehicle in an attempt to combat congestion, as well as pollution concerns in urban areas. The focus of these thesis is a fault tolerant control system to improve the robustness of the vehicle, as well as allow for future autonomous vehicle functions to be tested on it. The development of the control system began with deriving the requirements from the vehicle’s hardware, the goal of the project and foreseeable changes in the future. From there, the processors were selected, electronic control units were ordered, the vehicle’s necessarily electrical connections were completed, and the control software was deigned. Once every part of the project was completed, the control system was integrated, and testing was completed at the university. The goal of the control software was to allow the vehicle to be drivable if a motor, motor controller or steering actuator failed due to an electrical, mechanical or feedback fault. Due to the vehicle’s modular design it allowed other components to compensate for failures, while maintaining vehicle controllability and predictable vehicle dynamics. Furthermore, the control system allows for autonomous vehicle functions to be added and tested on the vehicle. This was tested through the addition of a lane following models, along with the control system’s path following function. The developed control system was shown to improve vehicle controllability when faults occurred, as well as allowed lane following to work effectively with the system structure and communication channels chosen. Overall, validating the design as well as allowing future mechanical designs or autonomous functions to be tested on the vehicle.