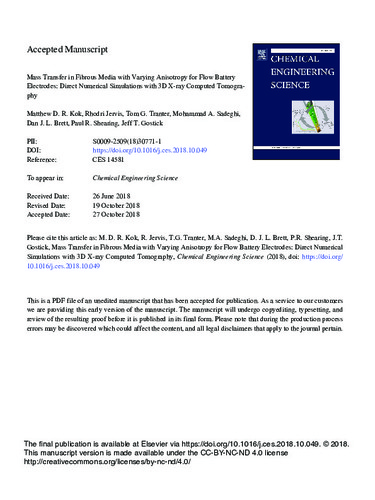 A numerical method for calculating the mass transfer coefficient in fibrous media is presented. First, pressure driven flow was modelled using the Lattice Boltzmann Method. The advection-diffusion equation was solved for convective-reacting porous media flow, and the method is contrasted with experimental methods such as the limiting current diffusion technique, for its ability to determine and simulate mass transfer systems that are operating at low Reynolds number flows. A series of simulations were performed on three materials; specifically, commercially available carbon felts, electrospun carbon fibers and electrospun carbon fibers with anisotropy introduced to the microstructure. Simulations were performed in each principal direction (x,y,z) for each material in order to determine the effects of anisotropy on the mass transfer coefficient. In addition, the simulations spanned multiple Reynolds and Péclet numbers, to fully represent highly advective and highly diffusive systems. The resulting mass transfer coefficients were compared with values predicted by common correlations and a good agreement was found at high Reynolds numbers, but less so at lower Reynolds number typical of cell operation, reinforcing the utility of the numerical approach. Dimensionless mass transfer correlations were determined for each material and each direction in terms of the Sherwood number. These correlations were analyzed with respect to each materials’ permeability tensor. It was found that as the permeability of the system increases, the expected mass transfer coefficient decreases. Two general mass transfer correlations are presented, one correlation for isotropic fibrous media and the other for through-plane flow in planar fibrous materials such as electrospun media and carbon paper. The correlations are Sh = 0.879 Re0.402 Sc0.390 and Sh = 0.906 Re0.432 Sc0.432 respectively.