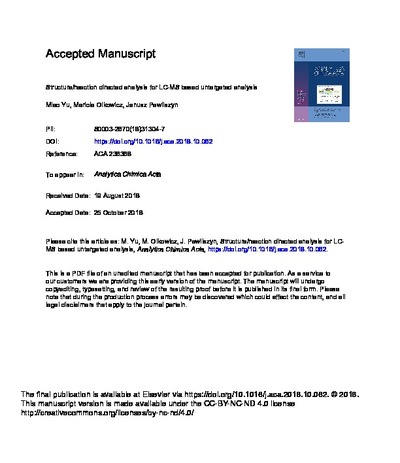 In LC-MS based untargeted analysis, data is collected at the peak or ion level, although the investigated biochemistry processes occur at the compound or reaction level. To this end, the presence of redundancy peaks such as co-eluted peaks, multi-chargers, adducts, neutral loss, isotopologues, and fragments ions often muddle subsequent statistical data analysis. In order to fill this gap, between peaks and compounds/reactions, independent components must first be found at the peak level, then evaluated at the compound or reaction levels. Based on paired mass distances (PMD), the algorithm GlobalStd, based on retention time hierarchical cluster analysis and global analysis of PMDs within clusters, is here proposed to extract independent peaks from raw LC-MS data. Following its application, a structure/reaction directed analysis can then be used to evaluate compounds at the structure or biochemistry reaction level, based on similar PMDs among different retention times clusters. As a proof-of-concept, the developed statistical method was applied to data obtained for in vivo SPME sampling on fish. In total, 277 independent peaks were demonstrated to stand for most of the variances found for the total 1459 ions detected via LC-MS. Following, both known homologous series or biological reactions along with unknown bio-processes, which may involve oxidation/reduction reactions or homologous series, were analyzed via a structure/reaction directed analysis. The findings of this analysis yielded interesting information regarding the data, for instance denoting the possible occurrence of a biosynthesis process involving l-Carnitine and its precursor 4-Trimethylammoniobutanoic acid. Such PMD relationships could also aid in the screening of annotation results. To this end, semi-quantitative analysis based on structure/reaction directed analysis is also here proposed for further investigation of unknown patterns or for removal of contaminants in metabolomics studies. The developed data-driven algorithm has been included in a PMD package with a GUI interactive document, and is freely available online (https://github.com/yufree/pmd).