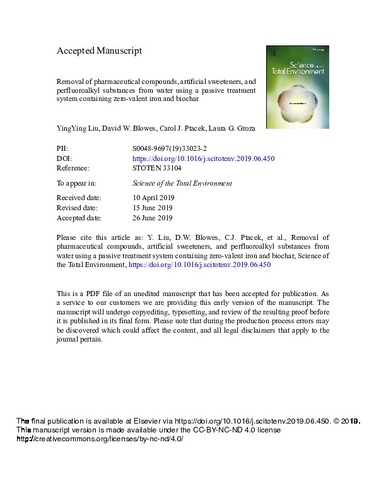 Emerging contaminants are widely detected and persistent in environmental waters. Advanced oxidation processes are among the most effective methods for removing emerging contaminants from water; however, high energy consumption greatly increases the operating costs and limits large-scale applications. In this study, a passive treatment system consisting of four columns packed with mixtures of silica sand, zero-valent iron (ZVI), biochar (BC), and a mixture of (ZVI + BC) were evaluated for simultaneous removal of eight pharmaceuticals, four artificial sweeteners, and two perfluoroalkyl substances (PFASs) from water. Overall, the passive treatment system was more effective for removing target pharmaceuticals (almost complete removal) than artificial sweeteners and PFASs (partial removal). Columns ZVI, BC, and (ZVI + BC) exhibited similarly effective removal (>97%) of target pharmaceuticals, including carbamazepine, caffeine, sulfamethoxazole, 3,4-methylenedioxyamphetamine, 3,4-methylenedioxymethamphetamine, ibuprofen, gemfibrozil, and naproxen, from ~9 to <0.25 μg L−1; pharmaceuticals were more rapidly removed by Columns ZVI and (ZVI + BC) than Column BC, except for ibuprofen. Column ZVI was more effective for removing artificial sweeteners acesulfame-K and sucralose than Columns BC and (ZVI + BC); however, BC exhibited relatively greater removal of saccharin than ZVI and (ZVI + BC). Acesulfame-K and saccharin (~110 μg L−1) were partially removed in the treatment columns. Cyclamate was not removed in any of the columns. However, >76% of input sucralose (~110 μg L−1) was removed in the three treatment columns. Reactive medium BC alone was more effective for removing target PFASs than ZVI and (ZVI + BC). Input perfluorooctanoic acid (PFOA) (~45 μg L−1) was partially removed in the columns containing BC but not ZVI alone. Between 10 and 80% of input perfluorooctane sulfonic acid (PFOS) (24 ̶ 90 μg L−1) was removed in Column ZVI; greater removals (57 ̶ 99%) were observed in Columns BC and (ZVI + BC).